The Furies and JFK at the Railway, February 22nd! 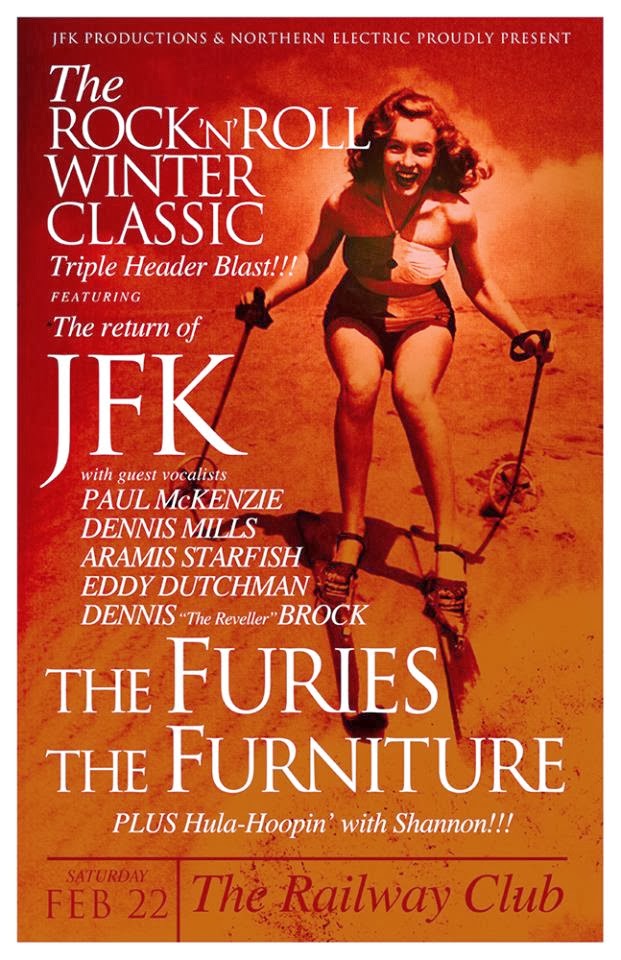 These days there are not so many chances to see The Furies - the sinewiest, Lou Reediest, "rock throwback"-iest garage dwellers of the early Vancouver punk scene, cryogenically frozen on Salt Spring Island through the 1980's and 1990's and thawed out in all their prehistoric glory just a few years ago, attitude (and sinews) intact. (See my early articles on/ interviews with The Furies Chris Arnett here, here and here, along with amazing photos of a scene of a few years ago... and stay tuned: there will be more news to come about Chris Arnett, very soon). As was the case with, I believe, their last gig in the city, they are opening this Saturday for "the fuck band for the ages," JFK, whom I wrote about here - but this time they will play at the hallowed Railway club. Not that I would discourage anyone from staying there until closing time, but it does occur to me that on such a night, one might catch The Furies and then scoot down to the Rickshaw to see Bison, say. Of course, seeing the Furies and Bison on the same night might cause unexpected growth of new body hair... but with my luck it would probably be on my back...
Posted by Allan MacInnis at 6:12 AM

Of course, back in the Seventies the Vancouver Punk-Rock studio system used to grind stars out like link sausages, but that kind of vertical integration turned out to violate even the limited anti-trust laws here on Commercial Drive. More's the pity for today's poorly-schooled entertainers; the training we got instead of a real childhood means that in 2014 a broken-down old Punk can still make a buck. Literally.

Here's a few pics of the Furies from the evening.