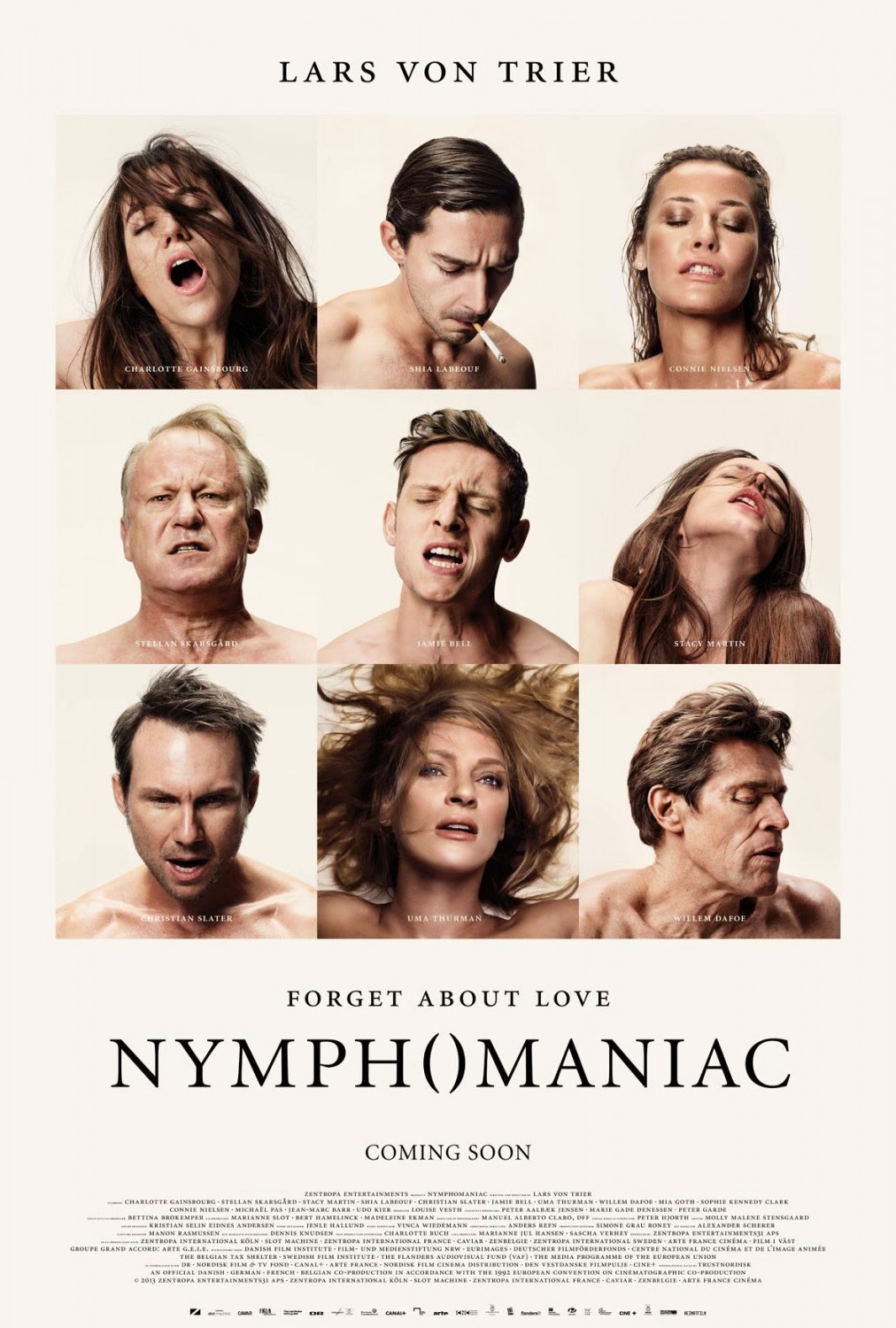 Yes folks, Lars von Trier's Nymphomaniac is opening in Vancouver very soon, running in two parts, just like Kill Bill did - but released at the same time, so you can watch them back-to-back. Peter Bradshaw of The Guardian writes about it here, if you want to read a description of the film from someone who has seen it.  I am most curious about Bradshaw's statement that this film is "the first von Trier film that is not a tiresome practical joke on the audience." That's a very interesting thing to say - though in fact, even without having seen the film, I have to disagree.

I don't really want to read his review in detail - I would rather see the film for the first time through my own eyes - but, apt a characterization as that is of some of his movies,  there are several von Trier films that are not any sort of practical joke, tiresome or otherwise. Zentropa, for instance - also called Europa - presumes an audience every bit as smart and reflective as the filmmaker, asking questions about cinema and their relationship to it. No matter how passive and thoughtless your relationship with cinema, I don't think you can watch that film - I may be wrong on this - without, in some clumsy way, considering the ways it foregrounds your processes of identification with Jean-Marc Barr's naive, arrogant, but indubitably, painfully sincere main character and in turn asks you to think about what it means to be an "American viewer" of the film (or of the war that the film is set after, or of a film constructed for American viewers about that war, or of any sort of American cinema at all...). Any time you might start to drift off to sleep and dream along with it's narrative, von Trier pokes you in the ribs, wakes you up, and reminds you that you are WATCHING A MOVIE, that this act has social and political implications and carries with it responsibilities, and that you need to pay attention to what you are doing. It's almost like a little film theory class, a friendly invitation from von Trier to think about cinema and your relationship with it. It's a film that von Trier has made for his peers, his equals - and is still my favourite of his movies, since it seems his most democratic, his most sincere, his most straightforward. Again, I may be wrong - but I don't think you can really understand Lars von Trier's cinema without having seen it.

The next few von Trier films continue to provoke audiences to think about cinema, but are often anything but friendly in this regard (though The Kingdom is pretty playful, and Dogville pretty forgiving, even to the point of pandering a little). If anything, rather than friendly invitations to think, mid-period von Trier films are more akin to punishments for not doing so. This is where the "practical joke" factor applies: entering 1996's Breaking the Waves without your critical facilities on high alert is to be seduced into bed by someone who fully intends to whip on an evil clown mask and start laughing maniacally at the point of orgasm, ensuring the orgasm will not, cannot be shared. To my understanding, the final images of that film are meant as a mockery of the viewer's earnest acceptance and engagement with what has gone before, a sort of ha-ha-I-fooled-you, look-how-stupid-you-are-for-having-bought-into-this... made all the worse by the fact that many viewers, even smart ones, seem not to get the joke that's being played on them. The Idiots and Dancer In The Dark are equally as cruel, chastising viewers for believing too easily what they see, for not realizing that Lars is only "pretending to be an idiot" (pretending to make melodramas; they're actually meta-melodramas). If you get sucked in, you will be punished, most cruelly in the case of Breaking the Waves, which seems to have a sort of feel-good ending but which, in fact, is laughing at you for having bought into it. Nothing democratic or friendly going on there! He's sending you home in a dunce cap, while the bells in heaven ring.

Or take Dancer in the Dark. I made the mistake of springing the film on my girlfriend without fully preparing her for it, when her finicky disc drive and dying DVD player (since replaced) failed to accept any other von Trier films I had brought. It was not my first choice for a point of entry into von Trier's work - and if I'd remembered it clearly, I probably wouldn't have played it for her at all, at least not until after she'd seen Zentropa. It turned out that my warnings that von Trier is a cruel filmmaker could not adequately prepare her for how cruel, particularly when we have Bjork on screen dancing about and singing about her favourite things (he is good at seducing his victims, you have to admit). When my girl - someone whose sincerety, in engaging with cinema, is a good thing, who does not deserve to be shat upon for being willing to connect emotionally with a film, however vulnerable it makes her to the predations of Hollywood - was emotionally traumatized by the ending of the movie, I had to try to scramble to help her out: wait, wait, you don't understand: he's not sincere. He's set you up for this. He's pranked you. Don't give him the satisfaction...! Noooo!

I couldn't really help, however.  Lars, you made my girlfriend cry! It was the second maddest I've been at him since the credits rolled on the theatrical screening of Breaking the Waves - though this time it was partially my fault, so I had to kind of forgive him.

Anyhow, I may well be seeing Nymphomaniac alone, but I will be seeing it. Besides, unlike Bradshaw, I think von Trier got tired of pranking his audiences over ten years ago, with Dogville - a film which, like Zentropa, foregrounds its artifice, rather than trying to seduce you into complacency and vulnerability. Further, unlike his previous films, the film actually caters to the audience desire for a feel-good climax, as bloody and nasty as that climax may be. It's sort of his "Tony Scott moment," the first time he really lets you share his orgasm: when Nicole Kidman goes on her spree of vengeance, a major shift is happening in von Trier's cinema, where you can identify with his sadism and participate in it, instead of being its victim.

So 1996 was when von Trier's practical jokes on his audience started, several years into his film career; and 2003 was when they stopped. Sorry, Mr. Bradshaw, but you're wrong.

Since that time, von Trier - I actually think of him as "Lars" at this point, but I guess it's a familiarity I shouldn't presume - has moved in a very interesting direction: making his only boring, overly didactic film (Manderlay), his only overt comedy (The Boss Of It All), and two films (Antichrist and Melancholia) which show him fully embracing the considerable resources at his disposal, making an odd cross between Hollywood spectacle and Tarkovskian metaphysical cinema. Whatever their strengths or weaknesses, neither seems to me to be chuckling at their audience. In fact, I think von Trier is getting rawer at time goes on - that we're getting closer and closer to his unguarded heart; his whole Jew versus Nazi thing at Cannes shows in fact how much he is prepared to trust that people are understanding what he's saying, how little his guard is up. The days of chuckling up his sleeve at how dumb we all are seem to be well over... now we get the pleasure of chuckling at him!

(Which, by the way, is about as much of a reaction as his "I'm a Nazi" spiel deserves).

Anyhow, I'm very curious about Nymphomaniac. I am not unconvinced that he won't return to practical joke mode - the film sure sounds like a sort of elaborate prank, to me, with its two-admissions for one movie Kill Bill structure and subject matter that hearkens back at least a little to his cruellest film ever (Breaking The Waves). I wonder if nymphomania is meant as a metaphor for cinematic promiscuity, for the willingness to sleep with pretty much any movie that comes your way...?