Yes, folks: my fondness for the cinema of Peter Hyams extends so far that (thanks to Dave of Red Cat Records!) I am now watching, and enjoying, his new film with Jean-Claude van Damme, Enemies Closer. 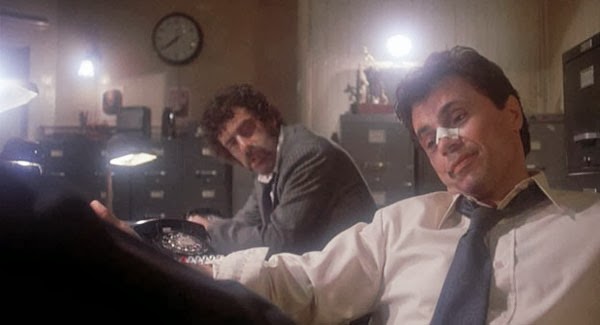 Hyams has, to my knowledge, only made one truly classic movie: Busting, his first theatrical feature, made in 1973. It's about two undercover narcotics cops who go up against a "respectable" gangster and the cops he has in his pocket, only to find themselves increasingly marginalized and powerless. Fans of vintage Elliot Gould, Robert Blake, or Allen Garfield - or people who just love gritty 1970's American cinema - absolutely need to see this film; it's a sleazy, depressed, sweat-and-dirt encrusted piece of cinematic cynicism, the trailer for which is also pretty great. I have always assumed that Jason Patric's moustache (and toque) in Narc is a homage to Gould's in Busting: 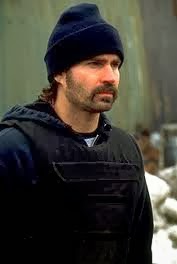 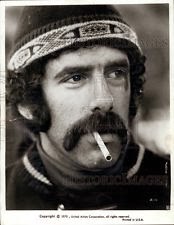 If facial hair like that isn't enough of a selling point for you, Busting features what I hold to be the best foot chase ever filmed: what William Friedkin accomplishes with car chases in The French Connection, Hyams does with foot chases, and there are several of these throughout his cinema, often serving as centrepieces - in The Star Chamber, Capricorn One, and no doubt others (I forget if there's a foot chase in Running Scared but I would not be surprised). And indeed, much of Enemies Closer involves people running around after each other, though since the action takes place on a small island, you can't really describe this as a chase... 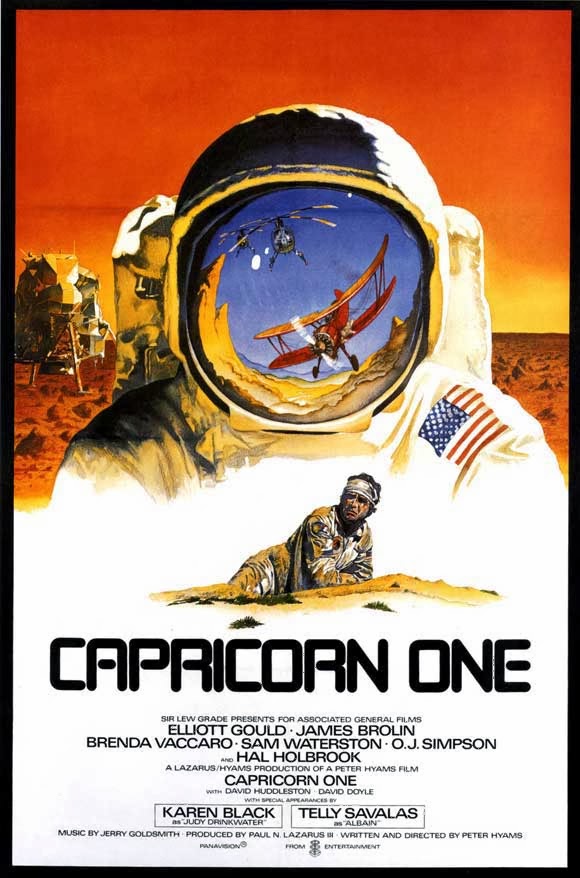 Anyhow, even if Hyams has made only one truly great film, he has never made a film I have failed, on some level, to enjoy, and certainly many of his movies are well-above average and deserving of their cult status. The truth is, as commercial cinema gets more and more bloated and CGI-laden, I'm growing increasingly fond of the humbler, simpler films of yore, some of which - like 1990's Narrow Margin - I didn't much care for at the time, but which now have a palpable charm to them, an innocence, an integrity. (Plus there's a couple of great scenes in that film where James B. Sikking squares off against Gene Hackman. I'm kind of a fan of James B. Sikking, in fact, as an under-appreciated character actor, frequently used by Hyams; this and The Star Chamber have to be his career highs). 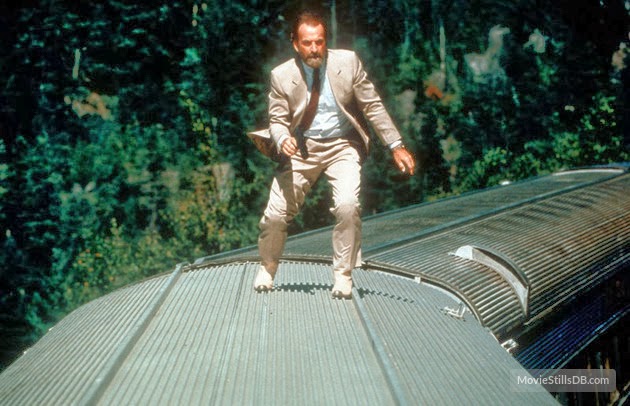 Other solid, enjoyable Hyams films include Outland and The Presidio (both with Sean Connery) and at two other van Damme films, Timecop (which I haven't seen yet) and Sudden Death - which is sort of Die Hard for hockey fans. I haven't looked at 2010 in years, and I missed Hyams' film with Schwarzenegger, End of Days, but A Sound of Thunder is goofy SF fun, and I even took some pleasure in Beyond a Reasonable Doubt - his critically-panned recent Michael Douglas thriller - though part of the fun of that one is that the Big! Twist! Reveal! is so fucking OBVIOUS that you'll guess it about fifteen minutes into the film and then go away chucking when you're proven absolutely right.

But even bad Hyams' films have their moments. I hold Capricorn One, his somewhat risible Mars-landing conspiracy film, as one of his failures; among other things, it features one of Gould's earliest terrible performances, where his wisecracking rings hollow and makes him just look completely unconvinced by the movie he finds himself in. Even still, there are some fantastic scenes, like the one where the main bad guy, Hal Holbrook, fakes his regret when delivering bad news about the fate of men who he fully intends to murder, before they're even dead. It must be Holbrook's evillest moment on screen. And those black helicopters are beautifully filmed, and - hey, I'm even kind of fond of Telly Savalas in this one, an awful actor being put to good use... 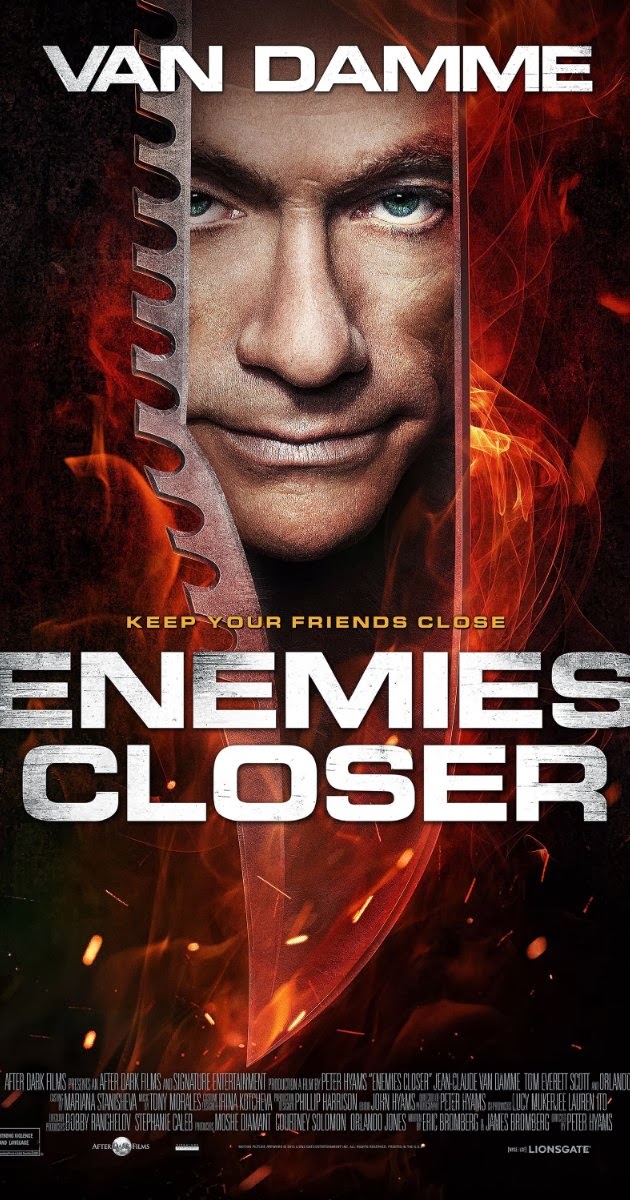 Anyhow, here's a few good reasons to see Enemies Closer. If they apply to you, you will probably enjoy the movie:

1. It has been so long since you saw a film where people beat each other up every fifteen minutes that you feel nostalgic for the experience. The film will bring you back to the good old days when you would indulge in the odd guilty pleasure video rental involving Steven Seagal, Chuck Norris, or, indeed, Jean-Claude van Damme himself. The fights are intense, beautifully choreographed and shot, and do not appear to be computer generated in the slightest. Cinema involving real bodies doing real things that look very much like they might hurt... there's a sweetness there, you know? Something strangely old-fashioned and not to be had for too much longer (once van Damme and Seagal and Norris and their ilk are gone... will there really ever be an "action" star on their level again?).

2. Playing against type, van Damme hams it up as the villain most delightfully, and what a villain he is: an ex-military vegan mercenary on the hunt for a lost cargo of heroin, he spends half the film offering asides about global warming, ethically-sourced coffee, cow farts, and the pleasures of wild strawberries. Then he kills someone, and eats an apple. There's a sort of restrainedly campy irony to his performance here, post-JCVD, that actually brings to mind, of all people, the hallowed Udo Kier; van Damme had a lot of fun with this role, I would guess. Plus he has red curly hair and appears in a Mountie uniform! You need more than that? 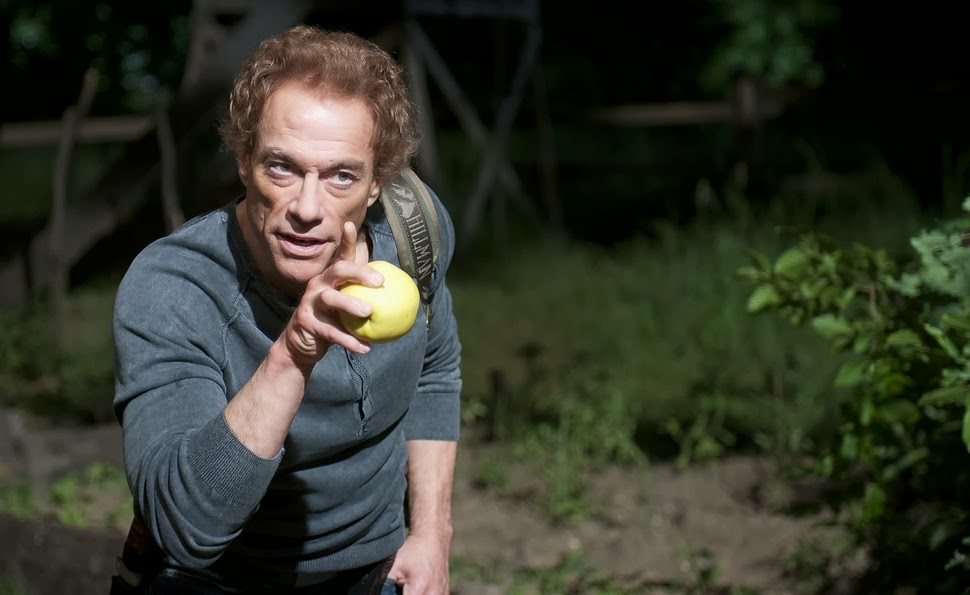 3. No film that begins with a float plane flying to a remotely forested area, where bad things will happen, can be all bad. Rituals, Clearcut, American Gothic... if you know a film that begins in a float plane, let me know, because I think I've liked every one I've seen. The locations of this film put me strongly in mind of BC, too, even though IMDB says it was filmed in Bulgaria...

Actually, I can't really think of any other reason to recommend this film - beside it being the new Peter Hyams' movie - but I've had fun with it. Odd to watch a film made in 2013 and experience it through the filter of nostalgia, but that's exactly how to best watch this movie: with sweet fondness for the action movies you watched as a kid, and never had much respect for... but secretly kind of enjoyed. Now that the form appears to be nearing extinction, its time to give it some love. Enemies Closer makes it easy...
Posted by Allan MacInnis at 3:28 PM