The Jello Biafra birthday bash on Monday got off to a slightly rocky start - neither Nardwuar's videos nor Ani's film were very well-projected, which is unfortunate, considering that the Rickshaw is obviously a former movie theatre. Maybe a real, screen-shaped screen and a better projector would be a good investment for events like these? Ani's film was a bit glitchy, too - so it might be worth your time to check it out on Youtube, even if you were in attendance; Jello does some of his best acting work as Francis, the sculptor (because we all know he can do broad and intense, but he's quite subtle here, seems broken and sad and defeated, which are not attributes of his character I've ever noticed...).

The scariest thing Jello brought up during his spoken word was the "NAFTA on crack" Trans-Pacific Partnership proposal, which almost no one (including me) had heard about before he spoke on it (he surveyed the audience, but spared us blame for our ignorance, since apparently this malicious bit of corporation-privileging international politicking is a well-kept secret at present). Jello was sharp as ever, despite having to don what he called "old man glasses" to read his notes; I can't recapitulate the whole thing (an hour long talk at least) from memory, but it was nice that he ended on an updated version of an old crowd pleaser, a routine I remember from his earliest spoken word albums, about ideas for band names. Cuntstubble and Brown Sabbath were my favourites; I remembered the Earthfahrt one from the original recording, and his joke about a metal band named Cheney harkened back to the his past proposal for a metal band named Mondale, which lets you know how long this routine has been around. (Jello updated the idea of an album called Lest We Forget by Six Million Jews by putting the face of Bush II on the album cover, instead of Reagan; he seemed appropriately outraged that Obama has done nothing to shut down Gitmo or prosecute the Bushies for their crimes, something more Americans should be vocally upset about).

Strangely, considering that spoken word was mentioned everywhere that I read (or wrote) about the event, some people were actually upset, on arriving, to find Jello talking, when they wanted to be hearing music; I gather there were even a couple of walkouts, and a few people seated near me were none too quiet while Jello was up there - something I don't really understand; why attend a Jello Biafra birthday bash if you aren't prepared to listen to him? 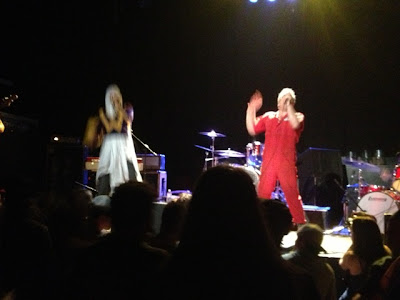 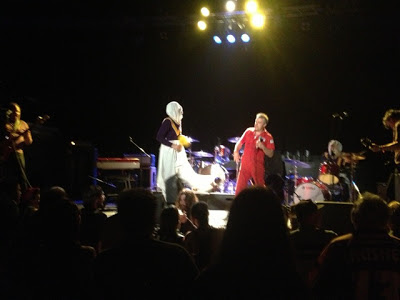 The evening picked up considerably with Thee Goblins, beginning in Acetone-and-drums mode before Jello and various Evaporators got onstage. Nardwuar recruited various members of the audience to contribute expressive dance and background grunts. He's every bit as entertaining in Goblins mode as he is as the Evaporators frontman, though his Goblins persona is considerably different from his Evaporators one; he comes off like some warped fairytale grandmother, is really quite odd to behold. The more I see of Nardwuar the more I'm convinced he's some sort of genius; I know people who still think of him as irritating and aggressive, as an interviewer ("the doot-doo-doo-loot-doo is all about power, he forces you to do it with him..."), but they really, really should see him play music to begin to understand what he's about... He's truly one of the MVP's on Team Vancouver's music scene...

The night's real fun began with a variant on "Mario Cuomo Works At Domo," with Jello getting onstage in a Domo uniform provided by Nardwuar (which reminded me of an orange Gitmo jumpsuit, appropriately enough). The songs that followed were the high point of the night; while Fuel Injected .45 disappeared into the role of Jello's backing band every bit as skillfully as the Melvins did a few years ago (though they didn't don masks to hide their faces), Thee Goblins kept much of their identity - since they just have too much identity to ever really efface themselves - and thus recontextualized Jello in such a way to really foreground his playful, music-fan side. Hearing "Let's Lynch The Landlord," "California Uber Alles," "Too Drunk To Fuck," and "Viva Las Vegas" played with Nardwuar on Acetone organ was new and unexpectedly delightful, as was the final song: David Clayton Thomas' "Brainwashed," with Nardwuar joining Jello on vocals - an amazing piece of Can-rock that I didn't know before last night; thanks to Jello and Nardwuar for educating me. It was every bit as special as hearing Jello do Wesley Willis' "Rock'n'Roll McDonalds" at the Croatian Cultural Centre a few years ago...

Sadly, given how special that set was, the Rickshaw was nowhere near capacity. I sure am glad I was there...

If Thee Goblins plus Jello was a giddy delight, Fuel Injected .45 were formidable and forceful and a far more serious heavy-rock commitment, with a very sexy Ani Kyd strutting about in business attire (maybe reflecting an apparent burst of ambition on her part; she's changed her image a lot, and has a bunch of projects in the chute, seems to be preparing for a big push out there, which I hope to document more of in the future). I was wearing out by then - I'd slept poorly the night before - but stuck it out for their entire set, mostly drawn from Past Demo(n)s; the coolest song by me was entitled, unless I got it wrong, "Is This a Joke?" - a great idea for a tune and a reaction to life that I am all too familiar with. Jello, when he got onstage, seemed kind of at a loss as to how to react to Ani sitting him down centre-stage and performing "The Sex Song" for him, with her making a joking reference to a lapdance and initiating a fair bit of contact between them; when he started performing back, it was with exaggerated, theatrical discomfort, rather than lechery, which might say something about how he actually felt! Ani definitely had the upper hand for that one...

Still, once Jello and Ani got on the mike together, we got a very cool punk rock climax to the night,  with a rare version of the Dead Kennedys' "I Spy," a song I'd all but forgotten, as well as "Police Truck" and, of course, "Holiday in Cambodia." By that point, it was after midnight, four hours since I'd entered the theatre, so I didn't have a whole lot of energy left, and slunk away without giving Jello his birthday present - a Christian themed album with a great cover, very much in keeping with his aesthetic (the Reverend Bob Bateman's No Place To Hide, which he doesn't have). I'll mail that to him tomorrow, along with my Oscar Brand album with the "Guantanamo Bay" song on it, and an album I snagged by the NORAD band - the North American missile defense of yore... He probably has that, though... how could he not?

Happy birthday, Jello! Thanks for celebrating it in Vancouver... come again with the Guantanamo School of Medicine sometime soon, okay?
Posted by Allan MacInnis at 1:30 AM