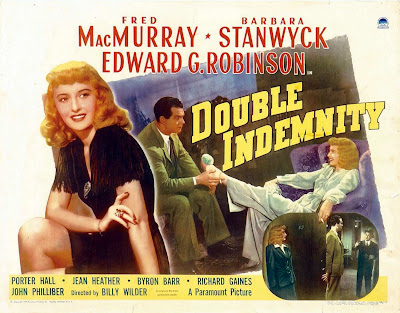 A striking number of the truly great films noir are deeply, deeply Oedipal. Take The Postman Always Rings Twice, for one example: the errant "son" (a hitchhiker just passing through) schemes to replace the father (a benevolent Greek businessman) and get the mother (a steaming sexpot whom the father can no longer satisfy) all to himself (a fate which, I should note from experience, is not all that it's cracked up to be). Out of the Past and Criss Cross work similar angles, but in each case the man-to-be-replaced is himself occupying an illegitimate position - he's a gangster, a tough guy, deserving his fate, so the protagonist's plot is made a bit more sympathetic. For maximum noir poignancy, James M. Cain (or Jim Thompson) style, the protagonist should be transgressing the law of the father from the gitgo, entirely illegitimately, his desire understandable but sinful from the roots up. We know he's doomed, but we can't help wanting him to get away with it, because our own transgressive desires have been so powerfully invoked... 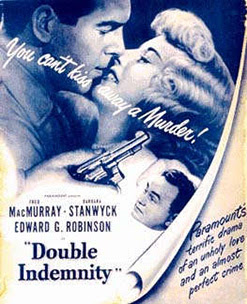 Such is the case with Double Indemnity, playing this weekend at the Cinematheque, which is surely up there in ANY critic's top five list of films noir in cinema history; it also features one of the great femme fatales, played by Barbara Stanwyck, and one of the most touching "father-son" relationships in the subgenre (between Fred MacMurray, as an insurance salesman drawn into a murder plot, and Edward G. Robinson, a senior investigator at the same firm, who is the real father figure in the film, not the man that Stanwyck and MacMurray plot to murder). The film has such a dark vision of human psychology that Charles Brackett reputedly walked away from it, being replaced by Raymond Chandler; yet you're wholly caught up in the story, even knowing from the outset that things will end badly. (This is no spoiler, since the film is narrated by a man who has been shot, taking the form of a confession; the shadow of doom hangs heavy over the entire film). If you haven't seen Double Indemnity, it's a great film, deserving to be seen in a theatre (though my experience of seeing it at the Cinematheque a few years ago is that it came across as far funnier to the audience than it was intended to be - so it also merits a private viewing, where its darkness can actually still unsettle...). The Cinematheque is screening it over four nights - it's the most-played film in their Wilder and Brackett retrospective - so you have lots of chances to see it; I'll be checking it out again myself... 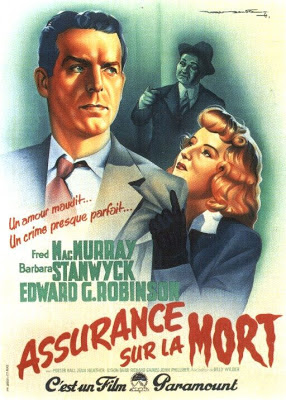