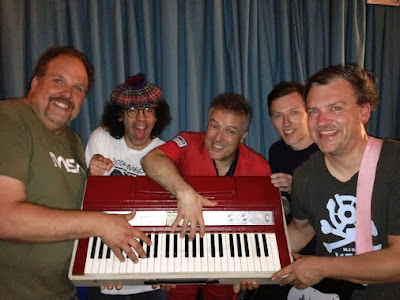 The following is a quote from Ani Kyd which, to my knowledge, didn't get worked into The Skinny interview  pertaining to tonight's Jello Biafra Birthday Bash at the Rickshaw; here, we were talking about Jello's record collecting:

We’ve been to different cities before, and he can’t go anywhere without going to record stores or buying something. If there’s a record store, I’ll be like, "you should go in and take a look," and he’s like, "Oh, no, it’s not just taking a look. We’re going to be here for a couple of hours." And he is - he’s in there, he’s in the back room, he’s talking with the owners. It’s crazy. When he comes to town - he used to stay with me all the time and I would pawn him off on Nardwuar, because they’re super record freaks together, right? I would call Nardwuar and say, ‘You want to take Jello record shopping for the day?’ And of course Nardwuar loved it, and they’d spend ten hours in a record store… I’d say his record collection is like, four floors of records, in every room; he had these cabinets built from the floor to the ceiling,  just these big wooden type of cabinets, for records. And you walk into another room and it’s like - "oh, records, imagine that!" It’s mind blowing. And he has some obscure records, from all over the world. Sometimes he’ll do the thing where it’s like, "Look at this cover!" He’ll have no idea who it is, but he’ll be like, "this is ridiculous," and so he’ll love the cover so much that he’ll buy the record. I'll ask, "Do you even know who that is?" "No, but it looks fantastic!" And he’s run into so much stuff that he knows what half of the stuff out there is; someone will ask him about some obscure record and he’ll be like, "yes, I have a copy of that, and I saw one at the Value Village" - he’ll know every member of ever band; he’s like, an uber-fan. And one of the things he used to say to me is, "Well, I don’t actually play an instrument, so for me, knowing all this music and knowing all the history is my way of being a musician."


Jello, of course, is a former customer of the late Ty Scammell (or possibly Scammel), who had a booth in the back of the Vancouver Flea Market for years. Ty was the man who discovered The New Creation's Troubled in a Salvation Army LP bin - one of 100 extant copies of the original vinyl, which he salvaged from total obscurity; the last copy to surface on eBay of the original vinyl sold for $1700. Ty also was the man who introduced my youthful self to many, many great recordings - for instance, the Love Sculpture's momentous version of the Sabre Dance, with Dave Edmunds on guitar. I actually remember Ty telling me while I shopped his bins that he was quite excited that Jello Biafra was coming to town; Jello laughed when I had a chance to relate that anecdote the other week, since no doubt Ty's excitement had more to do with his desire to sell stacks of records than any DK's fandom - he was more an old hippie/ psych guy than a punk, after all...
Posted by Allan MacInnis at 12:49 PM