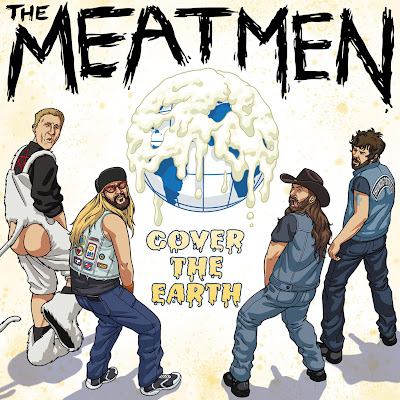 You folks realize that advance tickets for The Meatmen show tomorrow night are only, like, $7, that today's the last day to buy'em, and that they're going to be more expensive at the door, right? Got mine at Scrape - they might still have a few, or try Red Cat, or... I'm spinning some craziness from their last album, Cover the Earth, as I type this. The band covers Thin Lizzy, BOC, Motorhead, Fear, The Fugs, Black Randy, Roky, Jerry Lee Lewis and ABBA, and does a version of "Motorbikin'" that trumps Chris Spedding's original. There's even a hugely entertaining cover of GG Allin's "Highest Power" on the disc (y'all know that GG once called Tesco a poseur, right? Read the response in Mark Prindle's interview with Tesco here - RIP the Prindle Record Review site, by the way; Prindle mothballed it last year! Lotta very entertaining reading on it).

Anyhow, speaking of cover tunes, I asked Tesco during our talk for the Straight (see also here, here, and here) about cover tunes and more. Thought I'd type out a bit more of that for y'all!

Have you ever had your songs hijacked in a way that you disapproved of? Like, say, Ian Mackaye wasn't very happy with what Slayer did with "Guilty of Being White." So has anyone ever taken a Meatmen song and covered it, maybe without noting the irony...?

Uhh... no, I don't believe so. I mean, I would be flattered if anyone did that! I did not know that Slayer did a Minor Threat song.

They did a couple, I believe. They had an album of covers, too. They changed one of Ian's lyrics to being "guilty of being right," which Ian was, I gather, really not very happy with. They say they're being ironic as well, but it's Slayer, so...

Yeah. No, I can't honestly say. A lot of the bands that would cover me are not going to make the mainstream, certainly. My wife's always lamenting the fact that none of my jingles have made it on car commercials, because you can get, like, $80,000 for five seconds of music for a commercial... but alas, "Tooling for Anus" and that kinda think aren't going to make it on a Volkswagen commercial.

Talking about covers, I have Cover the Earth here. How many of these songs are going to be in the set?

Actually, none of those songs on there will make it in the set. But we do do a few covers. We do "World Up My Ass" by the Circle Jerks, because that's going to be on a tribute CD that's comin' out. And we actually do a Judas Priest song - but we don't always play that, only on special nights. And then we do the Venom's "Evil In a League with Satan," which has been a staple of our set for [a long time], and we do "Alcohol" by Gang Green, which is technically a cover but we've been playing it for so long we kinda consider it one of our songs, now.

Nope, we don't do that any more.


Aww. Let me ask you about Judas Priest... one thing I notice, going through the Touch & Go book, here, is that, other than a few Venom reviews, it's almost all punk, with almost no mention of metal. And I know for myself, when I was growin' up as a young punk, the sort of tribal division between punk and metal was a big deal. At one point I even sold off all my metal, disavowed it... you ever do anything like that?

Not at all. I've always maintained the full spectrum of what I liked. There was that moment when Metallica and Venom kinda popped up, and the speed metal thing, and Venom just seemed like a perfect band to feature. I was still buying Van Halen records back then, and listening to them, but we certainly weren't going to review them. I don't know exactly what my mindset was. There was no format, per se, obviously, because it's just a scattershot blast of reviews all over the place, it didn't matter what it was [including a review of U2's Boy! Though the vast majority is either UK punk and "new wave" or North American hardcore]. We didn't purposely exclude metal, but I can't say why there isn't more of it in there.

By the way, what Priest song are you doing (if you do it)?

You ever seen the video for that one? It's, like, in a shower.

Right, right. I love "Breaking the Law," if you do a queer reading of it.

It's total transgression. Or "Hell Bent for Leather."

You could take every Judas Priest lyric and realize there is a gay connotation to it. Like, "Delivering the Goods." "Between the Hammer and the Anvil." Think about that one!

...and we continued on from there. Yes, it's true, I actually don't find some of the more extreme of Tesco's ventures into the politically insensitive funny - even if he doesn't mean it, I just don't get off on cringing - but there are whole delightful albums worth of Meatmen material that doesn't bother me in the slightest - even songs that get a little close to MY bone (so to speak). Lest this all seem to be degenerating, I will say nothing here about the thing about beating off while watching videos of yourself beating off (don't worry, that link is just to a Meatmen song); but eventually the full interview will be online, and we did talk about that (guess which one of us has actually done it?).

See y'all at Fortune Sound Club!

Posted by Allan MacInnis at 3:44 PM