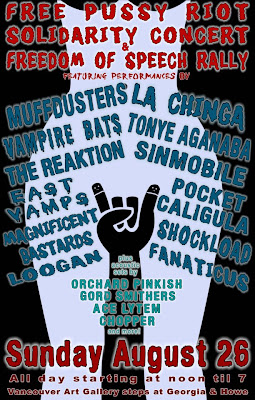 My total lack of enthusiasm for blogging at the moment should be apparent. Sorry, folks.


But for anyone checking in here, note that there's a Pussy Riot "solidarity show" that I won't be at on Sunday, all day at the Vancouver Art Gallery. Poster above! Bev tells me Ron Reyes is involved, somehow, but I don't see Piggy listed - not sure where he pops up.

An actual benefit (proceeds to Amnesty International) is going to happen Sept. 7th at Iron Road, but I'll have more on that later...

In other news, as y'all no doubt have read elsewhere, Metallica is offering tickets to their 3D concert shoot on August 27th (Monday) for a measly $5 a head. I find Metallica a bit hard to swallow - from the Berlinger documentary, I get the impression that they're a kind of grand-scale celebrity carwreck, warped by money and fame: it ain't ALL Bob Rock's fault! But they are nonetheless a historically important band who have their moments of greatness... For $5, I'll go see Metallica, sure.
Posted by Allan MacInnis at 9:28 AM

Here are the photos from the Pussy Riot Solidarity Concert & Freedom of Speech Rally that took place at the Vancouver Art Gallery on Sunday Aug. 26, 2012

Hey, thank you, these are great! (I live in the 'burbs so my time in Van is limited - couldn't be there - so it's nice to see).