The Dicks, Sister Double Happiness, and Gary Floyd: some post-Pride Week queer punk and roots music for y'all 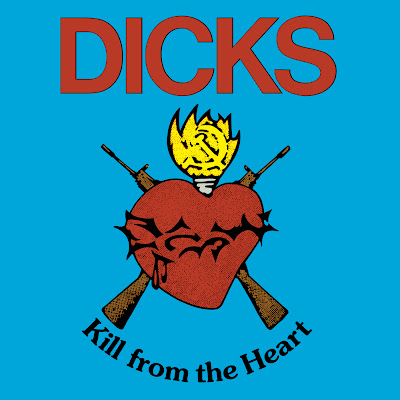 I guess I'm one day late for Pride Week, but y'all know that The Dicks' Kill from the Heart and These People albums (as well as the "Dicks Hate the Police" single) have all FINALLY been reissued on vinyl, right? (CDs of the full-lengths also include bonus tracks). If there's a more confrontational queer punk song than "Saturday Night at the Bookstore," about the glories of the guy-on-guy gloryhole, I've never heard it; we presume that the singer, Gary Floyd - yes, the same Gary Floyd namechecked by the Butthole Surfers - is baiting various straight punks in the audience in that live recording with his offers of fellatio, and this seems about as gutsy a move as the guy could make in those very homophobic days (if I ever get to interview him, I need to know if he was ever assaulted while performing this song, or as a result of it; surely the answer is yes. It also might be worth asking if he ever picked anyone up with it!). I gather from Mike Usinger that performing in a dress was a feature of Gary's stage shows, back then, too, and there are photos online of him in full on Divine-like drag in 1980. The Dicks also crossed some pretty daring lines with "Little Boys Feet," but had tons of more straightforward punk political songs, too. A favourite of mine is "Executive Dive," which finds the singer simultaneously gloating at and identifying with a businessman about to commit suicide; I also love the bluesier "Sidewalk Begging" (not on Youtube, save as part of a live set from 1985) and "Dead in a Motel Room," being one of those rare people who prefers the (San Francisco-recorded) These People to the earlier, more hardcore Texas-recorded Kill from the Heart. And of course, "Dicks Hate the Police" became a semi-hit for Mudhoney...

Anyhow, fond as I am of The Dicks, I felt like a bit of a dick myself to discover a few months ago that Gary and Dicks' drummer Lynn Perko had been recording through much of the late 1980's and early 1990's with the band Sister Double Happiness, completely ignored by me. I had heard of them, of course, but the name suggested bouncy bubblegum pop, and I took no interest, not realizing who the singer was, or that the band, far from bouncy pop, were performing a sort of grunged-up take on blues and roots music, with an occasional taste of The Dicks in the background, as one finds in the lyrics to "Ain't It a Shame." I've been playing catchup, and finding all sorts of amazing songs - favourites so far include "The Whipping Song," and the dark, powerful "Waiting for Anyone," which is a great example of just how powerful and expressive Floyd's voice can be. It's a more commercially accessible music than The Dicks made, but it's still challenging and rewarding stuff (there's an entertaining Electronic Press Kit viewable on Youtube, with footage of Gary singing, by the by). And now that I've caught up with Sister Double Happiness, I'm turning my interests towards the full-on folk/country music of the Gary Floyd Band - for instance, here, singing "From the Darkness Into Light," or here - a clip Gary recently posted on his Facebook page, doing "Wild Side of Life." There's an article on No Depression about how the band had a period of success in Germany while American audiences were completely ignoring them, which says a lot more about how lame audiences are here than it does about the music of Gary Floyd...

Anyhow, I'm in a space where I don't know why I'm blogging or who I'm blogging for, but for anyone paying attention, spend some time with the links here, eh? These are pretty vibrant slices of American music... My best regards to Gary Floyd!
Posted by Allan MacInnis at 2:11 AM