Robots on Fire for free, Wednesday May 2nd 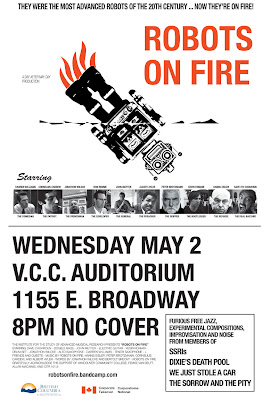 Fun stuff: Robots on Fire have pieced together a trailer for their upcoming free concert on Wednesday from an apocalyptic Kinji Fukasaku film that I have yet to see (Fukasaku made several very rowdy yakuza films in the 1970's, and attained another kind of notoriety for an apparently Godawful SF film called The Green Slime, but today's cinemagoers are more familiar with his final completed feature, Battle Royale. Those wishing to expand their awareness of Fukasaku are directed to the first film in the Yakuza Papers series, usually given the ungainly English title of Battles Without Honor and Humanity; it's truly essential Japanese film fare. If Martin Scorsese had been Japanese, he would have been Kinji Fukasaku). Sax-bot Darren Williams also directs your attention to this video, which has no particular connection to Robots on Fire at all, except spiritually (or philosophically, depending on how much of an atheist you are. Cinematically, meanwhile, it kind of evokes Zabriskie Point crossed with Jackass). There will also be a Sorrow and the Pity show at a venue called the Toast Collective on Friday. Apparently I was sent a Facebook event invite for that awhile back, but thems what know me know that I have very limited use of that site - I resent how it has monopolized internet activity. Remember when people actually sent each other emails?
Posted by Allan MacInnis at 11:25 PM