Africa and the experience of colonialism there are topics which have always fascinated me, but I sometimes suspect I approach the continent like a blind man being given selected samplings of an elephant: there must be very important pieces to the puzzle I'm missing, because however much I try to imagine the whole, the shape that registers is very, very strange. As you might expect - a few novels by Achebe, Okri, and Ngugi aside - most of my exposure has been through cinema. I've seen, for starters, Barbet Schroeder's horrifying portrait of Idi Amin Dada, which is so frank in depicting the dictator's backwardness, anti-Semitism, neurosis and arrogance that you actually end up feeling a bit sorry for him (whether he ate his enemies or not); he appears to have trusted the filmmakers and been reasonably generous to them, such that what emerges is on par with The Red Chapel as a filmic act of betrayal. In response to the "international cut" of the film - the one that screened outside Uganda - Amin apparently "rounded up" 200 French citizens and, according to the film's Wikipedia page (linked above) "confined them to a hotel surrounded by the Ugandan army, supplying them with Schroeder's home telephone number and explaining that their release was conditional on Schroeder's acquiescence" in making cuts. You can hardly blame him. 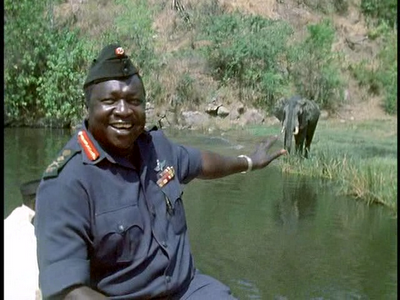 Then there's the mesmerizing footage in Michael Glawogger's Workingman's Death of a Nigerian open-air slaughterhouse where people laugh and chat and barter with each other as goats and other animals have their throats slit and bleed out into the dirt. Glawogger on the commentary talks about the contradiction the film cultivates, between the images (of a sort of "hell on earth," I believe he describes it - he lets his camera linger long on dying animals) and the normalcy with which people treat what is going on around them (which suggests that hell may not be that bad, as Glawogger puts it). Given the sanitized, desensitized denial of death and suffering that goes into the way North Americans trade in meat, you can't but marvel at the complete lack of hypocrisy of the customers, as they watch their "selections" get killed. But the pools of blood, the flies... it is very, very hard footage to watch. The happiness of the workers only deepens the cognitive dissonance. 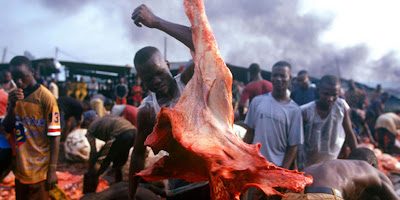 Perhaps the most difficult-to-process image from a film dealing with Africa that I've seen, however, occurs in the Fela Kuti documentary, Music is the Weapon (that appears to be a link to the whole film). I revere Fela's music (and by the way, for Afrobeat fans, DJ Frank Gossner plays the Anza Club May 5th - more on that later, I hope), but as a white, more or less middleclass liberal, seeing this doc was an unsettling, confusing experience. For one, hearing Fela describe in fairly non-progressive terms his relationship with his multiple wives is more than a little hard to process, since it requires one to juggle liberal imperatives ("be culturally open-minded," "do not react in a way conditioned by centuries of Western racism," "reject the subjugation of women") that cannot be simultaneously honoured. That's got nothing on the moment, however - and whether this occurs in the English-language or French cut of the film I can't say, as the DVD had both - when, in describing scars from tortures he received at the hands of the government, Fela turns around for the camera and matter-of-factly ("see?") drops his drawers, so we can contemplate the scars on his ass. It's fair to describe my reaction as one of culture shock. Fela doesn't seem to do this to rudely moon the camera or to be performatively outlandish, say; there's nothing of Iggy Pop taking out his cock or the Red Hot Chilli Peppers dancing around wearing only socks (and not on their feet). No, he appears to be merely illustrating a point; he might as well have been showing a scar on his elbow. On the one hand, this is perfectly rational - why is an ass more taboo than an elbow? - but on the other, though I don't consider myself particularly hung-up or prudish, I must confess, something in the offhandedness of his gesture is truly challenging to take in. Plus now I have a close-up of Fela's ass in my head, as seen dominating my TV screen.  I'd rather just dance to his music, you know? I really don't NEED to see the scars on Fela's ass, thanks. No, Fela, it's allright, I believe you. Really. No,  please - just... Arrrgh.

Anyhow, Fela Kuti's ass has nothing to do, thankfully, with the two films playing this weekend at the Vancity Theatre, Sleeping Sickness and White Material. I have seen the latter film in full; directed by Claire Denis and starring Isabelle Huppert, as a plantation owner facing civil unrest and a possible threat of violence, it was compelling throughout, though I must confess that the ending confused me a bit. Denis has a tendency to make films that amply profit from subsequent viewings, but that may be just a little elusive the first time through (though for those of you aware of this tendency, note that White Material is nowhere near as opaque as The Intruder). Tomorrow marks the film's Vancouver theatrical debut - fans of Isabelle Huppert in particular shouldn't miss it. 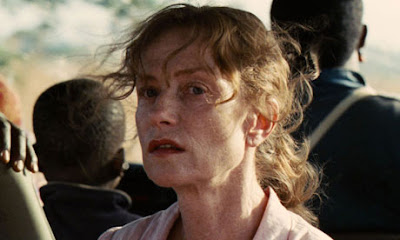 Sleeping Sickness, meanwhile - which I believe had a very positive response at a recent VIFF - begins with a suspenseful encounter between a somewhat wearied German NGO worker and his family and a border patrol as they try to cross into Cameroon without their papers being in order. Its highly compelling - the sort of beginning that immediately inspires confidence and interest. However, given the choice of continuing to watch the film on my computer tonight, as streamed "for promotional purposes only" and featuring an intrusive watermark, a stuttering picture, and a too-dark, less-than-hi-res image quality, or saving myself for the film theatrically tomorrow, I think I'm going to do the latter. It looks good enough that this is a film I want to see on screen. Admirers of Susanne Bier's In a Better World probably want to check this out (though one suspects that this film will be more morally complex, a little less heart-on-sleeve). If you'd like a more thorough review, I'll refer you to Mark Harris' in The Straight....

Of course, the Bresson retrospective continues this weekend at the Cinematheque, as well, and if I make it to the city for any of these films I may just trot from Sleeping Sickness to see Four Nights of a Dreamer. Seems like another good weekend for Vancouver cinephiles, anyhow. 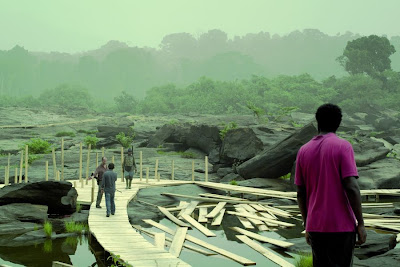 To Keira who left a comment: for some weird reason (probably having to do with Blogger's recent update) I am not being given the opportunity to PUBLISH your comment - no "publish" button was attached. I hope you were "blown away" in a positive sense... in which case, thank you!