Damo Suzuki at the Waldorf 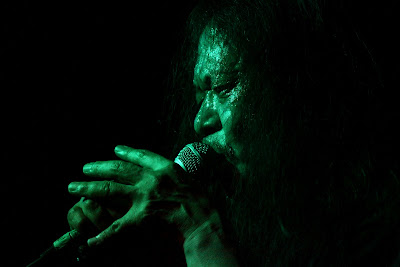 Damo Suzuki by Bev Davies, not to be reused without permission

Damo was his magnificent self the other night - though did anyone else think there was a surprising amount of Howlin' Wolf in his growling? I don't recall him ever being quite so bluesy here before. Von Bingen appeared to have songs written for Damo to perform over* - there was even one particularly striking punky/ new wavy number, which strangely made me think of Damo in the light of Peter Murphy (about as unexpected as the Howlin' Wolf comparison); it surely was not an improv** (and here's hoping that a recording was made and will see the light of day). I couldn't stick out the whole show, had to defect to catch a bus back to the 'burbs, but for a short time, I was joyously liberated (and not the only one in the decent-sized crowd who could be seen dancing). The appetizer for the show was also delightful - a screening with friends of Deadlock, which simultaneously brings to mind The Wages of Fear, The Good, The Bad and the Ugly,  and El Topo, and is definitely worth seeking out.

*I'm wrong about this.
**I'm told that the whole thing was indeed improvised. That's pretty impressive - usually you can TELL when a band is improvising, but I couldn't!
Posted by Allan MacInnis at 12:09 AM