"Mondo Justin" has some very strange choices (Casablanca? ...I mean, I'm sure he truly enjoyed it, but, I mean, just because during a psychedelic experience I once drank RealLemon lemon extract from a brandy snifter and enjoyed it doesn't mean I'm going to recommend it to anyone). 2001 is too obvious, but the Araki, the Waters, the Lynch, and yes, perhaps even Natural Born Killers make more sense. Return of the Jedi? Fuck off.

A discussion forum on the topic nets recommendations for A Scanner Darkly and Waking Dreams - this is also getting somewhere. I could see the suggestion of Lynch's Lost Highway working quite well. (I haven't done acid in something like 16 years so I can speak for no such current film fare). I think I'd pass on Fantasia and Koyaanisqatsi and Japanese anime but I guess I see where people are coming from. On the Shroomery website, someone suggests Fear and Loathing in Las Vegas, which seems obvious and agreable. AVManiacs throws Tron and the films of Kenneth Anger (especially Lucifer Rising, perhaps?) into the mix - all good, but not necessarily my ports of first call on this trip.

Bearing in mind that acid was a thing of my early 20's, and that I in no way advocate or participate in its usage now, my favourite film experiences under the influence (I can only manage five) are: 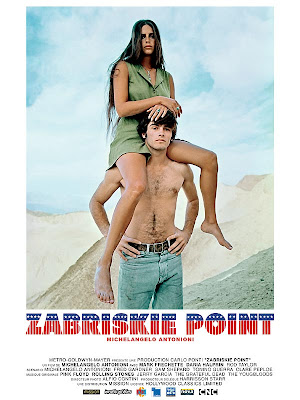 1. Zabriskie Point. You wouldn't necessarily know it, but altered states of consciousness play a significant role in this film - a sentimentalized view of '60's American youth culture by an Italian leftist arthouse filmmaker, co-written by Sam Shepard and connecting laterally with the Mel Lyman cult, in the presence of non-actor Frechette, who would later hold up a bank - claiming it as a revolutionary activity - and die in prison. Despite stunning visuals and music, you have to be attuned to such matters to really "get" the references, or even notice them. There's a scene where Daria and Mark, in the desert, do something that looks a LOT like dropping (near where Daria is talking about the "Soanyway River"), which prefigures the whole hippies-making-love-in-the-desert centrepiece; it's not just meant as a bit of filmic poetry, but, I think, as a signifier of a trip, and watching it stoned gives tremendous impact to certain adjacent shots (like the arrival of the tourists or the scrutiny of the cop, f'rinstance). The whole thing about painting the plane and returning it - including a bizarre line about being "back in time before they know it," as if Daria and Mark have been "out of time" during the experience - could be seen as an attempt to negotiate the understandings one attains in an altered state back to ones normal, waking consciousness. It doesn't work out so well, but - the explosion at the film's climax has some of the most interesting music Pink Floyd ever recorded post-Barrett, and the visuals are astonishing. See if you can find a version that doesn't have the fucking Roy Orbison song at the end, though (it doesn't belong there, was imposed by the studio and, alas, stuck on the recent DVD release). 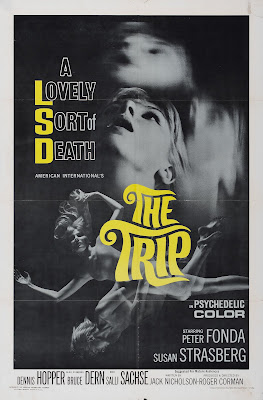 2. The Trip. It must sound cheesy and obvious, but the minds and actors behind this film - including Roger Corman, Jack Nicholson, Dennis Hopper, Peter Fonda, Bruce Dern - really bent themselves to the task not only of representing a psychedelic experience, but showing how it can help one attain insights into ones personality (whether one does anything about them is another matter, as the film's somewhat cynical/ moralizing ending makes clear). Nicholson, I recall reading somewhere, was undergoing a messy divorce when he wrote this, and seems to be delving into his own personality on a very deep level, at times (through ample fictitious filtration, of course - he doesn't actually appear in the film). One wonders how he feels about this film now - he may wince a bit, but it's undeniably an amazingly rich experience. Some of its visual effects and dialogue may be dated, but there's a lot of neon meat on this particular octafish's bones, especially if you approach it as just another drugsploitation film and allow yourself to be surprised. 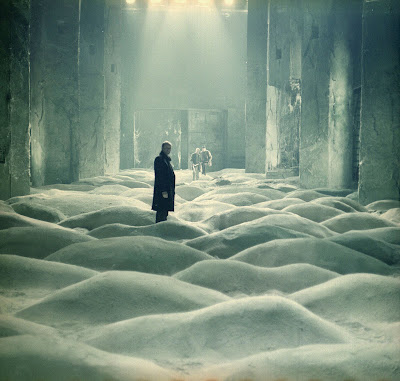 3. Stalker. For the truly ambitious - a rather heavy, but spectacularly visual, Russian film of profound spiritual/ metaphysical/ psychological scope, most of which is perhaps best meditated upon when not tripping, since it's not all that easy to process (unless, perhaps, you don't need the subtitles). But my God, what images, what sounds, what amazing cinema - a small cadre of psychedelicized friends and I watched this repeatedly from the state, and it blew us away every time. A scientist and writer are led into a "forbidden zone," where the rules of everyday reality do not apply, on a quest led by a mystical "stalker" to attain... well, it's best you see it. You will never look at cinema the same way again after experiencing this movie in a psychedelic state. Anytime a visually or spiritually ambitious film comes out of Russia, it gets compared to Tarkovsky, but the reality is, there has never been, could never be, a filmmaker quite like him. 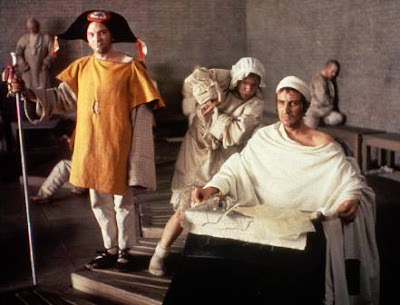 4. Marat/Sade: giddy, harsh, text-heavy, and definitely a perverse choice here - not many people would want to experience this with their mental shoelaces untied - but still a very, very funny and strange and provocative film, if you're of the right mind. Inmates at Charenton asylum reenact the last days of French Revolutionary leader Jean-Paul Marat, with commentary and direction by the play's author, the Marquis de Sade, and various musical numbers ("what's the point of a revolution without general copulation?". It may overwhelm less hardy viewers with the effort it takes to follow its arguments, but if you have a dark sense of humour, enjoy the play of ideas, have any interest in history, and like the idea of a Theatre of Cruelty, this film is unquestionably for you. Clip here, more writing on it here.

The last item on the list calls for a pause while I deliberate. Altered States is too obvious and probably too hokey, though it definitely comes to mind. Peter Greenaway's Tempest adaptation, Prospero's Books, is spectacular to watch in a psychedelic state, but I haven't looked at a Greenaway film in years, and feel no great lasting fondness for this one, as good as it was to me at the time. El Topo and The Holy Mountain both seem like obvious choices, but I've never seen either film under the influence, I confess, so can't really fairly put them on my list. Ditto Gaspar Noe's Enter the Void, though it screams for consideration. As for A Scanner Darkly, I'm not sure I'd want to visit it in a vulnerable psychic state; assuming one actually engages with the story (without being distracted by all the celebrities present, which I know keeps a few people out of the film), it simply gets too sad. I guess I could bow to the tastes of youth and mention Donnie Darko, but...

No, I think I have to resort to another obvious choice: 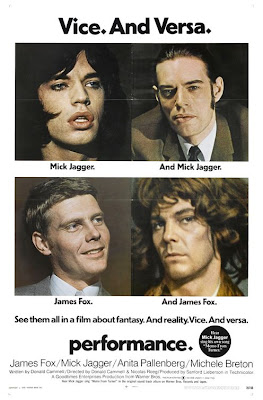 5. Performance. A decadent rock musician (Mick Jagger at his most counterculturey) and his female cohorts undertake to deconstruct, with the aid of sacred mushrooms, the sexual identity of a sadistic gangster hiding out in their building. Co-directed by Donald Cammell and Nic Roeg, with much of the visual sensibility that Roeg would mine throughout his subsequent career without ever producing another film quite as aggressively out-there or playful or puzzling as this; this seems now like an artifact of a very different world - a far richer one, unfortunately.

Does anyone care to add their own favourites to the list?
Posted by Allan MacInnis at 2:18 AM

Kung Fu Hustle, I had no idea what the film would be about. I grabbed it from Happy Bats took it home and howled.

Any of Eastwood's classic westerns and just about any other similar picture show are all built for the purpose. i.e. slow, not real difficult to understand, but filled with enough nuance to give the mind play. Cool soundtracks usually too.