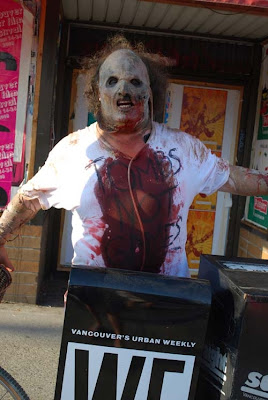 Photo by Femke, zombie by Kyla. That's me, under there!

Just wanted to wish Vancouverites a happy Zombiewalk this Saturday! There's still time to go get some makeup and fake blood and practice staggering, for those who have never done it - it's truly a delightful experience, combining street theatre and the spirit of Hallowe'en with a sort of ironic/absurdist protest march against pretty much everything 'cept eating people. Only in full zombie attire have I ever gotten to publicly stagger about the streets showing for all to see just how confused and alienated I am by my surroundings, how little sense they make... I never knew how rewarding being a zombie could be until I tried it... 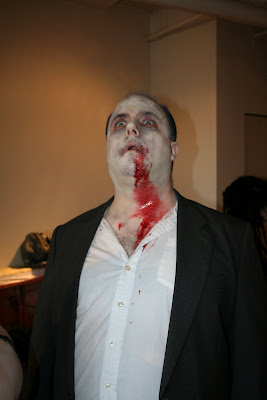 Photo by Dan, zombie by Harlow!

As cool as the zombie movie contest on the 19th at the Rio Theatre sounds, my favourite zombie-themed event this weekend is the Romero-thon on Sunday, playing the original versions of the three classic Romero films in their entirety, back to back. I haven't seen any of these films theatrically ever, with the exception of a highly significant double bill of Dawn of the Dead and Phantasm that my father brought me to in Mission when I was 14 or so; I find myself highly tempted to go. 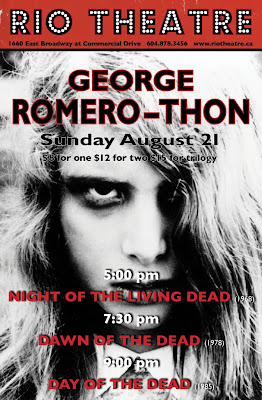 One caveat about Zombiewalk - while many delightful memories can be made from partaking of this experience, some traumatic ones can, too, so be kind to the kiddies out there. Zombiewalks just don't happen often enough for children to have a frame of reference for them. (Maybe in addition to casual Fridays, we could start having "zombie Mondays," eh? Then again, maybe we already do...).
Posted by Allan MacInnis at 11:41 PM