Important news for Crass fans (which they may already know) 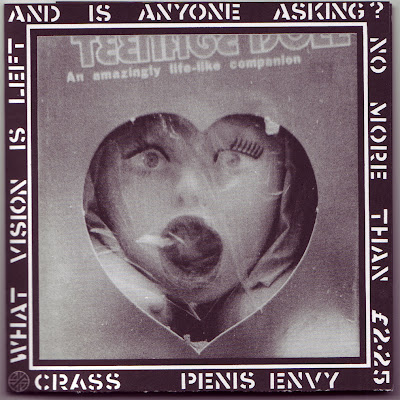 Maybe this is something everyone else already knows about, but it was news to me, so I'm bloggin' it.

A couple of years ago, I encountered an article by Penny Rimbaud online, which I can no longer find, about how internal disputes in the Crass camp had scuttled plans for remastered releases of their catalogue. It sounded like the dispute might sink Southern Records, as I recall; upon reading this sad news, I scuttled to scoop up what Crass releases I cared about that I did not already have, and felt justified, vindicated, etc. as gradually all Crass products - the main titles of which had been available for years in Vancouver shops - disappeared entirely. Suddenly, there was NOTHING - a few copies of Yes Sir, I Will kicked around longer than the others, since it's the least easily assimilated of their albums still in print, but soon those were gone too, and I had to assume that this would remain the case: that the youth of tomorrow would have to grow up in a world without the unique packaging, striking collage art, distinctive inky smell, and the kinda essential lyric sheets that are all part of the Crass experience. Being the type of guy whose heart warms whenever I see anyone under age 25 sporting a Crass emblem on their clothing, this was saddening indeed.

And then today I discovered that the Crass remasters are out, and have been so, unbeknownst to me, for some time. On first blush, they sound great - I haven't gotten close enough to spot the differences, but the three I picked up (Feeding, Stations, and Penis Envy) seem a lot fuller-sounding and revealing of just how richly, anarchically MUSICAL Crass could be. Better still, where past editions padded out CD-lengths or 2nd LPs with live tracks, these new versions sport previously unreleased (or at least hard to come by) demos, John Peel sessions, previously unheard songs and other rarities, all welcome. There are also extensive liner notes by Penny Rimbaud and less extensive contributions from Steve Ignorant, Eve Libertine, and perhaps others (I didn't buy'em all, so I don't know!). The original LP fold-outs are presented in quaint miniature, but they still smell like Crass ink! (I sniffed them happily). More from Penny Rimbaud on the Crassical Collection here!

Posted by Allan MacInnis at 1:34 AM