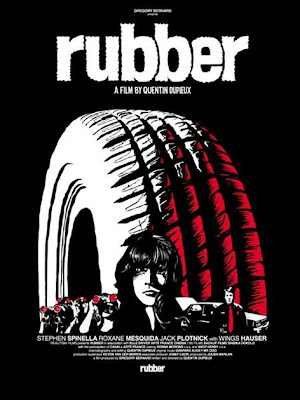 Rubber, directed by Quentin Dupieux, is a very inventive, very smart, and (I thought) very funny film involving a car tire that has been rendered animate, rolling about the US desert, pursuing a mysterious agenda of its own. I would mention its psychokinetic powers, but I don't want to give too much away.

It's also, tho' it's a bit of a spoiler, somewhat gory (hence the tagline used on one British poster, "the best killer tyre movie you'll ever see.") If absurd, surreal metacinema involving an animate tire doesn't sound like your cup of tea, the number of exploding heads in the film might still make it worth your while; they blow up real good. Other things blow up, too.

I suppose the film is a bit smartassed - because who but a smartass would even dream of casting Wings Hauser in it, hoping his name draws a certain stripe of cinephile? (Does everyone out there remember Wings in his greatest role, the evil pimp in Vice Squad? He sings that movie's theme song, too - "Neon Slime," which says a great deal for the content of that film - do check it out). I refuse to believe that Wings' appearance in this film was an accident; somebody somewhere suggested the idea of casting him, to enrich the in-jokiness of the movie. He does a fine job, too!

Smartassed or not, I still found Rubber a delight to watch - and am quite happily surprised that the DVD release has actually made it out to the suburbs, where two copies are present on our Rogers Video New Arrivals wall. Go figure. I'll take such pleasures where I find them. 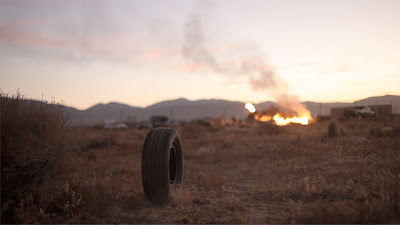