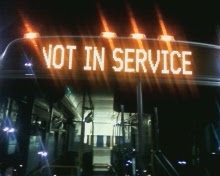 Fuckin' Translink, man... Maybe I wouldn't be so annoyed by a night like tonight if not being periodically subject to "fare inspections" by cops with guns, having to pass through uniformed gauntlets of Taser-totin' fuzz at the Skytrain station, dodging busted teenage female fare evaders who have been reduced to tears as they beg the transit police, dressed in ever more menacingly police-statish uniforms, not to ticket them. Shit like that, increasingly prevalent, puts a bad taste in my mouth, seeing our tax dollars at work protecting the interests of a private corporation from the evils of the occasional kid getting a free ride on a system that his or her fuckin' parents helped pay for... public transit indeed... It makes it harder to accept the bigger fuckups, like tonight. I left Vancouver by Skytrain around 11pm, travelling on a packed transit system (hockey night Saturday) that is radically under-prepared for the increase in commuters, like the concept of putting extra buses on on such nights is never even discussed. Having missed my connection by three minutes at Lougheed Mall, I see that it will take a half an hour - until just after midnight - for the next bus. I opt to hail a taxi instead, spend $30 to get a ride to Coquitlam bus loop, arriving just before midnight, in time to catch the 12:10 bus home, carving about an hour off my travel time - at least in theory, because it never came. No buses were rerouted to fill the gap, either - more than one went out of service, rather than turning into a Maple Ridge bus. By 12:45, there were over 50 people - many drunk, rowdy, and waving Canucks memorabilia - lined up waiting for the 701 Maple Ridge, then 35 minutes late. Some of the kids were getting aggressive with each other, & certainly a few were loud and obnoxious; I didn't relish the long wait in their company, the lack of any security personnel whatsoever, or the prospect of crowding into a sardine-tin with all of them after so long and annoying a wait. I gave up, wandered down the street to a Shell station to hunt out a taxi, stopping en route to warn some kids clustered at a bus stop down the road that if and when a bus did come, it would likely be full and pass them by - by that point it was about 1 AM. Fifteen minutes later, getting into another taxi, to spend another $35 on a ride the rest of the way home, I could see the same kids, still clustered across the street in the bus shelter, waiting for a bus that might never come, or just drive by if it did. Fuck.

Since Translink has the right to fine us for not living up to our end of the commuter service transaction, shouldn't WE have the right to fine them for not providing the service they're paid to provide? Call it $65 for the taxi fare and another $200 for the inconvenience I was subject to and I'd probably feel justice had been done.

Fuckin' Translink. Guess the moral of the story is that I shoulda stayed in town to see the Golers...
Posted by Allan MacInnis at 1:47 AM