Chainsmoking Reacher: the pleasures of pulp 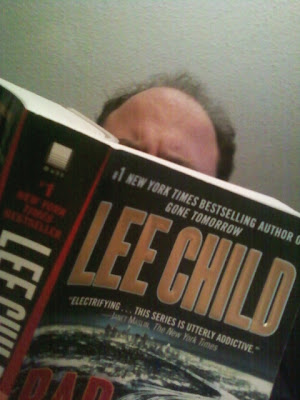 One of the great joys of being semi-unemployed these days is that I have the free time and energy for recreational reading. While I always mean to read more than I do, back when I was teaching ESL in addition to writing, I had pretty much my fill of language and too little room on my inward hard-drive to process novels; if I did find myself hooked on one, it was like it was competing for attention with my need to stay on top of my students' progress, a distraction I couldn't surrender to for long periods. I figure that between 2002 and 2010, I averaged maybe one novel every four months, if that (tho' I did read the odd bit of non-fiction). Now that I'm no longer DOING that job, for the first time in years, I've been plunging joyfully into the pulpiest of pulp - the sort of books that blurbs describe as page turners that keep you up all night - and absolutely loving it; there's nothing quite like the sheer pleasure of plunging into a well-told bit of pulp (and indeed I have lost a bit of sleep to finish a few of these). To be precise, I've been chainsmoking Lee Child's Jack Reacher series, finishing one book and picking up the next immediately thereafter. My, is this series fun.

For those who don't know, Reacher is an ex-MP with a powerful sense of justice that supercedes any sense of obligation to follow rules or laws; he drifts about America, with no fixed address, getting in trouble and having adventures - rather like the idealized "bum" that Pulp Fiction's Jules imagines himself as. People online have suggested that Dwayne Johnson - the Rock - be cast to play him, if that helps give you a sense of his character; serious literature this ain't, though the craft of constructing pulp this compelling still deserves high praise. The novels are completely, shamelessly - as "hero" tales tend to be - male-ego-reinforcing, with common elements to each book: Reacher finds a wrong in the world, often involving helping a woman in trouble; after much investigation and some danger to himself, he rights the wrong. In the course of his adventures, he almost always has sex with a beautiful woman, not usually the same person he's rescuing (I can recall encountering only one Reacher book where he doesn't get laid, Echo Burning); and though he is not always right, he always strives to do the right thing, or make amends when he fails. Along the way, he usually doles out massive punishment on a variety of bad guys. He is, in short, a poster boy for straight masculine identity as it has been dictated, without having the various distasteful sexist/ racist/ homophobic/ fascist attributes that such male heroes often have in popular culture (tho' there is, obviously, a bit of the vigilante to him). All of the tales are told in a fairly stripped down prose, reminiscent of Donald E. Westlake's pseudonymous Parker novels, of which I'm also rather fond. 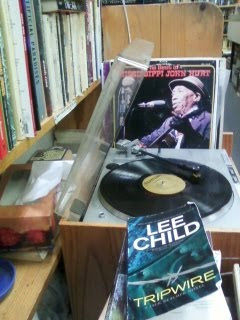 Crap or not, thus far, I've read ten Reacher books, averaging about three a month. The first two, Killing Floor and Die Trying, seem the least successful, but by the third book, Tripwire - a series high point, for me, in which Reacher goes up against a very dangerous, very corrupt Vietnam vet - Child knows exactly what he's doing, and delivers pretty consistently. I have four Reachers left to read, and hope that by the time I get through them, there will be a new Reacher on the shelves... How delightful not to have a job...
Posted by Allan MacInnis at 12:38 AM