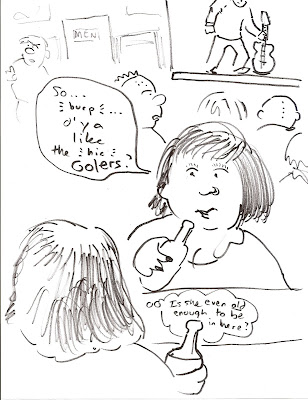 I did a comic strip awhile back for this blog in which some young punkette I met at the Cobalt (back when it was still the Cobalt) enthusiastically recommended the Golers to me. I have since that time bought all the Golers CDs, and count myself as a fan as well, tho' I have yet to catch them live. For thems what don't know, the band was named for the Goler clan (Wikipedia: "a clan of poor, rural, inbred families from Nova Scotia known for inter-generational poverty and the conviction of a large number of family members for sexual abuse and incest," chronicled in the book On South Mountain); their aesthetic seems to spring from some sort of pseudo-degenerate class-rage, with a rather complex wit to their lyrics (esp. given how outwardly, deliberately brutish they appear). The song "Salt Lick," for example, which tells the tale of a Goler groupie giving out blowjobs in the band room, is actually slyly clever; instead of the band being abusive thugs and dominating the female - a kind of traditional metal stance, cf. AC/DC's "Squealer," still one of the most revolting songs I've encountered - they're painted as horny, grateful goofs, approving of her enthusiasm: "we're lined up down the halls/ sweat's running off our balls/ she's doing us in the stalls/ slut!" You get the sense that the band are genuinely fond of this girl, who in no way appears disempowered or debased for the semen dribbling from her ass (also mentioned in the lyrics). I can't really make out any of the Golers lyrics without consulting a lyric sheet, mind you, but I am consistently amused when I do.