How Bev Davies spent the riot, with Black Lips pic 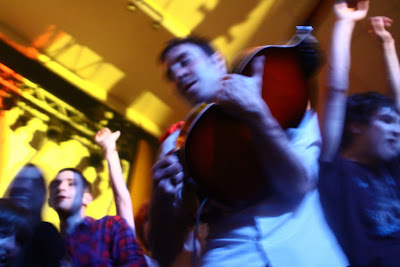 Photograph (of the Black Lips, presumably!) by Bev Davies, not to be used without permission

Bev commented on my thread below and sent in a photo separately; I thought I'd unite them.

Well, the game was dreadful. I turned it off somewhere through the 3rd period, knowing if we scored I would hear horns and would turn it on. I had received a dreadful email from a 'friend' earlier in the day and I was in a black place.

A friend from Texas Skyped me and I was mood wise; sad, bitter, and low. While Skyping I went to Twitter and saw and entry from the Black Lips, who were in town for the show I was going to at 10:30 pm. The Tweet said they had never seen a car on fire on a street before.

I thought OMFG there is a riot and turned the tv on. I went from one level in 1 second I was excited, showing my friend CBC coverage. My mood had changed. I was alive, excited and why who knows. Yes I wanted to go and take photos, and I did not. My son called and said not to go the the Black Lips at the Commodore. He said it was bad on Granville Street. He was watching TV also. I told him they had moved the show to the Rickshaw.

That night the Rickshaw on Hastings felt like a bomb shelter to me. The Black Lips may have done the best show I have ever seen them do. I was trapped inside the photo pit so forget the 3 song crap. I was there with stage divers over my head, air full of beer, St Pee the singer spitting into the air and catching it in his mouth. The entire scene was wild, no riot, music does that, takes a crowd to the edge of chaos. That was one of those amazing shows on an amazing nights in Vancouver.

Posted by Allan MacInnis at 3:23 PM