A couple of things I didn't mention...

...in my Georgia Straight review of the Bison BC show at the Rickshaw: Black Wizard's "Mountain Bitch" has a riff - you've got to wait for the bass to kick in on that Youtube clip to hear it - that sounds quite a bit like the one from the Dayglo Abortions' song about acting like Black Sabbath (the second song in the clip here). Considering this was likely entirely unintentional, and considering the debt Black Wizard owe to Black Sabbath, I thought this was pretty darned amusing.

I also really, really like Haggatha's EP, I should mention. I had to, to be honest, note that some people in the audience very noticeably couldn't take their music in a live context (that quote was a real quote!). They divide the men from the boys, let's say. I also thought - and said so, tho' it had to be axed to make the wordcount - that Phil Haggatha had the best facial hair of the evening. As usual.

By the way, those of you who can take it after the Peter Brotzmann show might enjoy seeing the Dayglo Abortions at Funky Winkerbeans tomorrow. The chance to follow up Brotzmann with the Dayglos, in my books, is not to be missed. 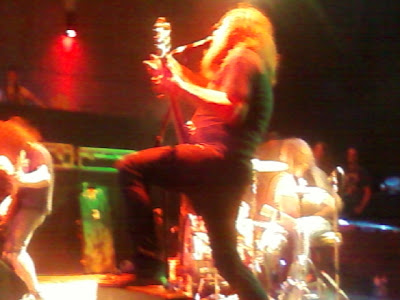 James Farwell of Bison BC as photographed with my cellphone...
Posted by Allan MacInnis at 11:44 PM