On the phases of Nomeansno/ Tour EP 2 review, AKA "aw, fuggit." 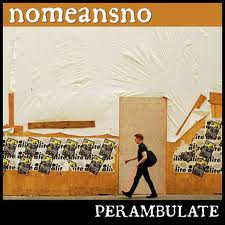 All of what follows is a preamble to a statement. Albums might be listed out of sequence, but what do I look like, a search engine?

(Note: this piece has been edited to reflect having seen Nomeansno last night at the Biltmore; they play again tonight).

Punk musicologists of the future, when they turn their eyes towards Nomeansno, will likely divide their discography into five distinctive periods (…or more, depending on how many periods are left to this band before their figurative musical menopause inevitably sets in - which may take awhile yet, given how energetic they are, live; for all we know, if the world doesn’t end, we’ll have twenty more years of Nomeansno in some form or another, something I am all for).

There is the “early phase,” in which the band HAD no consistent musical identity, each recording from which bears only marginal resemblance to the next, from the Residents-y, charmingly amateurish single “Here Come the Wormies” (for which I confess abiding fondness; the Residents should actually cover it, to repay Nomeansno for doing “Would We Be Alive”) through the stripped down bass and drums (but not bass’n’drums) of Mama and the full on caffeine-injected punk of the Fear Anger Hatred Betrayal 7" (or whatever the sequence is: I've never bothered to memorize it). No one, based on a sampling of these recordings, could give a very fleshed out description of Nomeansno; each release could be regarded as a period of its own, almost (though this would complicate matters greatly). It isn’t even that easy to see a lyrical consistency from song to song here – there’s a pretty far reach from “Wormies” to the present day (tho’ maybe “The Future is a Past” could be mentioned as a possible analogue; some arc-leaps between periods do occur). “Intelligent lyrics and a vaguely prog-funk inflected bass-based melody, emerging from a loosely punk social context, with very precise drumming” is about as much as one could say to sum up these early recordings – a rather vague, broad category that fits better with some songs than others (tho' it still applies today).

Next, there’s what might be termed, if Nomeansno were an ESL student, the Upper-Intermediate level, which ranges from You Kill Me and various EPs to the Small Parts/ Sex Mad recordings. There is certainly a musical identity forming, along with the growing popularity of Nomeansno as a live unit to be reckoned with, but within a given album, the band don’t quite have a complete grasp of their mature grammar. If it helps, I’ll mix my metaphors a bit: although the ingredients of the mature Nomeansno are all present in the pot, it is not quite the soup that it will become. There are carrots (“Victory”), cucumbers (“Body Bag”), cilantro (“Sex Mad” – grammatically, the imperative in the bunch) and potatoes (“Hunt the She Beast” – or is it an onion?), but they’re kinda floating around free of each other, a bit, not really forming a cohesive mélange (is that the word I want?). Some disagreement will doubtlessly exist whether to classify Wrong as belonging to this period or not, but most will agree: Wrong is the first album of…

...The Mature Nomeansno: with a sound that stretches from Wrong through to All Roads Lead to Ausfahrt, this is where Nomeansno seems to have come to full confidence and know who they are and what they want to do about it. The bit about the lyrics and the bass still applies, as does a certain variability between albums (with One as an extremely dark point and Ausfahrt as an almost compensatorily - tho' inconsistently - peppy, poppy, playful one); but from song-to-song, album-for-album, there is a greater cohesion of vision – this despite the departure of Andy Kerr and the arrival of Tom Holliston, midway through this period! When fans are asked by clueless friends what Nomeansno sounds like, this is the period most likely to be referred to. Collaborations done during this period, such as the one with Jello Biafra, also reflect this unified vision of the band’s sound; the soup is ready to serve.

Finally, we have the latest period of Nomeansno, now ongoing, and it’s what one almost might call the post-punk period (not in the sense that it sounds like GY!BE or such but insofar as it ceases to really make any sort of sense to call this "punk rock" - it owes more to King Crimson, 70's funk, and the blues than it does to, say, Black Flag. Though kids can still mosh to it. Kids can mosh to pretty much anything, these days, tho'). At this point, Rob’s interest in electronica, his use of Pro-Tools as a means of recording fully developed demos, and the band’s presumed distance from the punk scene (because Nomeansno, when they’re not being Nomeansno, are family men now, with rich hobby-level interests like golf and beer brewing, and aren’t really that active on the punk scene anymore, outside their own gigs – not like people like Subhumans vocalist/ Trespassers bassist Brian Goble or SNFU’s Mr. Chi Pig, say, whom you see at almost every major show in Vancouver; I’ve seen Tom Holliston at five gigs for every one I’ve seen a Wright brother at, bearing in mind that I've only seen Tom at two gigs, both by Mission of Burma). Rob’s songwriting has become somewhat unpredictable in this phase, with songs that sound like Middle Eastern martial music (“Something Dark Against Something Light”) to deconstructed blues ("Slave") to loping, slow waltz-timed numbers like “Old,” which may even see a bit of the Wright brothers' Irish background creeping in. Even songs that remind one of classic punk Nomeansno ("Jubilation"), on vinyl, anyhow, sound somehow different from what one has come to expect of Nomeansno - an intangible difference, and very hard to pin down, especially after seeing how well such numbers work live. Some fans, like me, are simultaneously worried and excited. The proverbial “old dogs” (no offense!) have been taught new tricks; what the fuck is going to happen next?

(One pleasant possibility, to make a circle of things, would be a decision to return to the musical aesthetic of Mama, actually –maybe even an updated recording of that album, call it Mama 2012? I was most delighted to see "No Sex," the greatest punk offering to the GLBT community on record of which I am aware, in the set last night. I wonder if Xtra West - almost typo'd that as "Xtra Wet," chortle - would pay for an interview with Rob Wright about that...?).

Picked up Tour EP 2 at Red Cat and I'm delighted with it. (It will also be sold at the show tonight, no doubt). My favourite song thus far recorded in this “ongoing” period of Nomeansno is “All The Little Bourgeois Dreams.” “Jubilation” and all of the other side are pretty damned good, too. I like Tour EP 2 (digital download here) much, much better than Tour EP 1: I guess Tour EP 1 served to pave the way… I get it now, I'm ready. Tour EP 2 is very, very good. The songs are killer live (tho' we only got "Jubilation" and "One and the Same" last night).

Nomeansno play Friday night at the Biltmore. If you have never seen this band, you are truly missing something. One of the great rock bands - fantastic. PS., Does Rob look like he's about ten years younger, suddenly? Is this somehow an effect of fatherhood, or what?
Posted by Allan MacInnis at 5:09 PM