Give The Rickshaw a Liquor License! 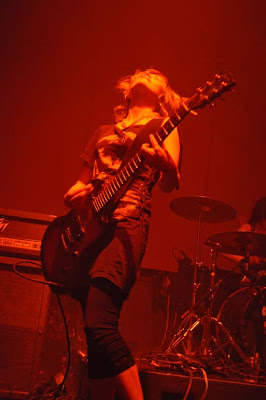 The Rebel Spell performing at the Rickshaw, photo by Femke van Delft

Sure, there are too many bars in the DTES already, but the Rickshaw - which hopes to get the first new liquor license in the area since 1990 - is not a bar, it's a performance venue. Since the destruction of Richards on Richards, it is one of the only places in Vancouver appropriate to housing a certain size of show and type of show, which has led to it rather cornering the market on the punk and metal scene in Vancouver - at least for mid-sized bands. 75% of the concerts I've gone to in Vancouver in the last year have been there, many of them by bands from Vancouver, many of whom - because of the values of the people who tend to play there - are identified as "East Van" bands. It's by far my favourite venue to catch music in in the city (I mean, technically the Commodore is a better space, but it's a bigger venue, which doesn't attract the sort of bands or crowds the Rickshaw draws; in two years, the Rickshaw has come in many ways to fill the gap left behind by the Cobalt, as it was formerly run, becoming a sort of punk community centre, at least on the nights when there are gigs; with apologies to wendythirteen, it's just a much nicer space to see shows than Funky Winkerbeans!).

I can understand, in fact, the concern about gentrification in the area, and wouldn't support the creation of a sports bar or other drinking establishment in the downtown eastside, but there's a big difference between The Rickshaw and some Yuppie watering hole; it's only open for events, usually on weekends; it has no daytime hours or tables for people to sit and drink. And it doesn't attract locals whose goal is just to get drunk, since the shows usually cost at least $20 to get into. There are a billion other cheap establishments for drinking in the neighbourhood that DTES drinkers don't have to pay to get into, in fact, so saying that "another bar is bad for the neighbourhood" is, in fact, a bizarrely irrelevant non-sequitur; with a billion places surrounding it that serve as watering holes for the poor, the Rickshaw being allowed to serve alcohol to its clientele can in fact DO NO HARM TO THE COMMUNITY WHATSOEVER.

No, the question should be whether a PERFORMANCE VENUE is good for the neighbourhood - a performance venue that just happens, like many others, to need to be able to sell alcohol to survive. It's certainly good for the Vancouver arts scene as a whole, but given the sort of people it draws and nurtures, I don't see it as being bad for the DTES, either. Rather than drawing self-insulating Yuppies, it attracts punks and young people - from local bands like The Rebel Spell, whose songs have a roughly anarcho-communist orientation, very much concerned with the fate of the working class, poor, and disenfranchised, to bigger, headlining acts like the Subhumans or Jello Biafra and the Guantanamo School of Medicine (both of whom are photographed at the Rickshaw here). Subhumans singer Brian Goble and drummer Jon Card even work in the DTES, in support of the community, as do members of Bison BC, Black Mountain, and other bands that play the Rickshaw on a regular basis. In fact, on show nights - which usually take place on one or two nights a week - there's a rare dialogue created between DTES residents and non-. You don't see DTES residents interacting with the wealthy salon-goin', condo-owning types who are descending on the neighbourhood, to go to high end pizza parlours or poke into some bizarrely out-of-place boutique - and who would want to interact with people like that, anyhow? But every time there's a lineup in front of the Rickshaw, before doors open, there's always at least a few locals trying to sell scavenged items, cadge coins, bum smokes, or sometimes just entertain themselves by interacting with the 20-somethings in line (not always productively, but - it beats the shit out of complete segregation!). I don't like the "accordioning" of the poor into a smaller and smaller space that we see in the DTES either, or the schizophrenic shift one experiences, sometimes in as little as one block, from gentrified condo-land to crackdealer row, as the wealthy muscle in on the poor. But PEOPLE NEED A PLACE TO PLAY AND SEE MUSIC, and MUSIC IS NOT THE ENEMY.

The Rickshaw is not the enemy, either, folks. Please let it survive.

Now about wendythirteen...
Posted by Allan MacInnis at 9:49 AM