Independent Flixx: another one bites the dust 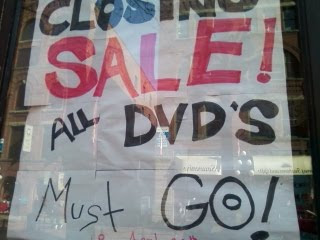 Seems like video stores are dropping so fast this spring that evolutionary theorists should take note - it's like they're caught in some sort of mass extinction death spiral...

When I lived in the west end, I would rent sometimes from Independent Flixx on Denman. I don't remember all the titles, but I know I rented - and thus first saw - Faster Pussycat, Kill! Kill! on VHS from them, back before that film was available on DVD, as well as the documentary about Negativland and company, Sonic Outlaws. They did a pretty good job of mixing up highbrow and lowbrow, arthouse and trash, and had - or so it seemed - a bigger-than-average selection of GLBT themed films to appeal to the Davie Street rainbow market. Guess what? A friend informs me by text that they're selling off their stock. Maybe people are rushing to get out before the market for used DVDs is saturated? You can already find stores with large selections sale priced between $3 and $5, and Rogers has "Buy one get two free" sales periodically. It's gotten so that charging $9.99 for a used DVD seems unrealistically exorbitant...

...News 1130 reports, further, that Blockbuster are closing a third of their Canadian stores on May 26th (they identify Videomatica as a "smaller chain" - oops).
Posted by Allan MacInnis at 10:10 PM