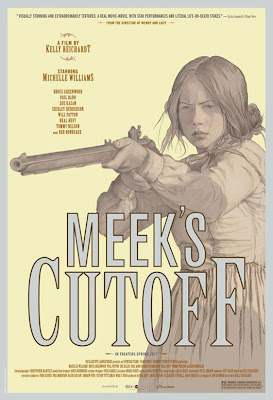 IMPORTANT NOTE: apparently the print of this film received by International Village is in some unusual format, requiring a lens they do not have to screen it. The 4:15 screening today has been cancelled, while they try to get a lens. They may have one by tonight but they may not, as of this writing. Just a wee caveat.

The two most exciting filmmakers in the United States at the moment, for me, are both from the Pacific Northwest: Robinson Devor (esp. as teamed with Charles Mudede) and Kelly Reichardt. Not sure what's happening with the new Devor/Mudede film - should be out soon - but Kelly Reichardt's Meek's Cutoff, which I gather looks at the settling of the west from a female point of view, opened today in Vancouver at the cinema formerly known as Cinemark Tinseltown (how I would hate it if Cineplex Odeon destroyed their beautiful neon, now that they've renamed the theatres the "International Village." It is likely inevitable, alas). If you poke back through my blog - do a search for "Reichardt" in the search box above - you'll doubtlessly find several pages of enthusing for her films Old Joy and Wendy and Lucy. Meek's Cutoff is her first period piece, and promises to be an ambitious departure, but I wouldn't know - haven't seen it yet! If you want to read the perceptions of someone who has, Katherine Monk has done a substantial review of the film in today's Vancouver Sun - Ms. Monk's non-cineaste status makes me regard her writing with some suspicion, and I try NOT to read reviews of films that I know I want to see, so I have only skimmed her piece - but it looks like she did some sincere work, in writing about this film.
Posted by Allan MacInnis at 12:21 PM