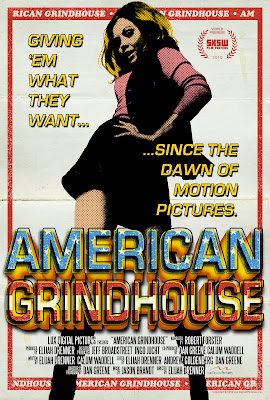 There's probably a healthy chunk of cinephiles in Vancouver for whom American Grindhouse - that's the link to the VIFF listing, the official site is here - is essential viewing, and and I don't wish to dissuade them: the film is highly worthwhile, featuring all sorts of information about the history of exploitation cinema in America that I did not know and was most curious to learn. Its scope is enormous, beginning with Edison, looking at some of the trashier early Hollywood offerings (like the silent white-slavery feature Traffic In Souls), then zipping through the institution of the Hays code and the division of cinema into mainstream and underground channels. It then proceeds to take in varied "genres" of exploitation film, from nudie cuties to roughies to teensploitation to biker flicks to drug movies to gore to blaxploitation to women in prison to Ilsa, She Wolf Of The SS, more or less following a timeline up to the present day, where the mainstream and the sleaze are one. Robert Forster provides affable narration, while a varied cast of commentators fleshes out the factoids and provides oft-colourful testimony - these including Fred Williamson, Larry Cohen, David Hess, Joe Dante, Allison Anders, Herschell Gordon Lewis, Jack Hill, William Lustig, and John Landis (seeming almost identical to the Landis of the better IFC doc The American Nightmare). A couple of the choices there are odd - I don't really connect Anders with Grindhouse cinema and it's funny that Lustig gets a fair bit of screentime without ever apparently being asked about his own movies - but anecdotes are consistently entertaining, like how Larry Cohen shot most of his cinema guerrilla-style on the city streets, without permits! Film clips, too, while brief, are often eye opening, particularly when dealing with lesser-known films - like the Nazi bikers vs. hippie Jesus flick The Tormentors, say. An avid notetaker and fan of this sort of cinema could easily emerge from the theatre with a list of twenty to fifty unforgettable, if at times awful, films to check out.
Nevertheless it must be said that American Grindhouse, for all its ambition, proceeds a little too hurriedly for its own good; it's rather like being ranted at by a cranked up film geek who somehow needs to prove he can masterfully present the whole history of his chosen genre in under 90 minutes. That's not without its charm, but there's a bit of an information overload that sets in, and, particularly as we approach the present day, this approach stops seeming to do justice to the films and genres it takes in (because really, how can you sum up blaxploitation in less than ten minutes?). I had actually expected the film to have a far narrower scope, taking in the glory years of 42nd street cinema sleaze, say between 1970 and 1975 - the period that the term "grindhouse" evokes for me, anyhow. That would have been more than sufficient, and would have allowed for more consideration of individual films, of their importance, impact, and ideas, as well as potentially offering more insight into the creative processes of the filmmakers or the conditions they laboured under; it could also have allowed the filmmakers to provide us more reason why - save for the obvious fact that these films are titillating - they are worthy of serious consideration now (assuming they are; the film doesn't venture to evaluate these movies, heaping the great with the godawful under an all-embracing cry of vive le grindhouse).
Still, this is an entertaining jog along the timeline of exploitation cinema, with more than a few delightful bits (I somehow had a lot of fun watching John Landis stumble over the pronunciation of Grand Guignol). Best not get your hopes too high, though - this is a good little doc, not a great one.
VIFF filmguide is online now! Start planning!
Posted by Allan MacInnis at 1:28 AM