DOA at the Biltmore with Li'l Guitar Army 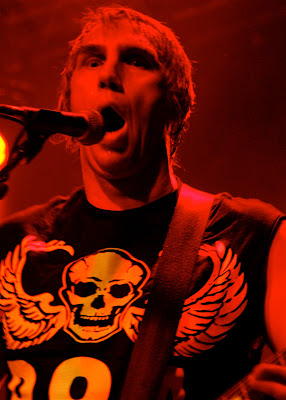 I meant what I said in the Straight: DOA's Talk-Action=0 is my favourite DOA album since War On 45 - the original EP, not the CD reissue - and I'm hoping to catch them at the Biltmore on the 1st. Li'l Guitar Army, too, are the most fun "new" live band I'm aware of in the Vancouver scene right now (although I admit I'm a bit removed from things these days). I was actually really quite relieved - having given Joe a bit of shit in print here and there over the last few years - to find myself really enjoying the new disc, and several of the songs - "That's Why I'm An Atheist," "I Live In A Car," the Dylan cover, and "Captain Kirk, Spock, Scotty and Bones" have stuck with me since I reviewed it. Maybe none of them are quite up to the high watermark set by Something Better Change, but then, very few punk albums anywhere are. Time to give Joe some respect - I mean, hell, without DOA, would I even have been a punk?
Posted by Allan MacInnis at 1:49 AM