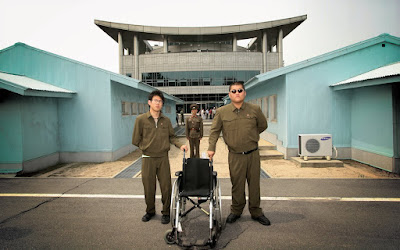 Stills from The Red Chapel by R. Johannsen

I like documentaries. I don't consider myself an expert in the field, but I've seen some fascinating docs in my day, and some of the living filmmakers I most respect - like Frederick Wiseman, Petter Mettler, or Michael Glawogger - are documentarians. Two of the films that immediately get my attention in the VIFF preview magazine are docs of a sort - James Benning's new, doubtlessly meditative and perceptually intense Ruhr, and John Gianvito's four-and-a-half-hour long Vapor Trail (Clark), about "the ecological disaster caused by a US military base in the Philippines." Gianvito's last film to screen in town, to my knowledge, was Profit Motive And The Whispering Wind, his haunting, moving, Howard-Zinn-inspired visit to graveyards and massacre sites connected to the US labour movement, filmed with no narration or - with one exception - music, just the sounds and images of markers and the rustling of wind in adjacent trees. I have definite intentions of viewing his new film this time out.
Of the hundreds of docs I've seen in my day, however, probably the one I would most recommend people seek out, as a somewhat neglected must-see - particularly for fans of docs-as-political agitation - is the cringe-inducing General Idi Amin Dada: No One Can Run Faster Than A Rifle Bullet (DVD Savant review here; it's sometimes also known as General Idi Amin Dada: A Self Portrait), shot by Barbet Schroeder in the 1970's. Schroeder somehow managed to secure permission to film the then-dictator of Uganda at work, on the priviso that Idi Amin be able to approve how he was represented - say, proudly displaying his copy of The Protocols Of The Elders Of Zion and explaining about Jews to the camera, or personally hosting a parade of Uganda's entire military force, which comes across as a cargo-cult approximation of a modern army, though perhaps formidable to some of Uganda's neighbours. The film gives the dictator enough rope to hang himself ten times over, and not an inch of it is wasted, leaving viewers in awestruck discomfort; Amin reveals himself to be so backward and brutish, as suggested by the Savant review above, that liberals will have to do a double-take to remind themselves that they are not participating in a racist action. It's a wonder that a team of Ugandan hitmen didn't seek out Schroeder and have him assassinated once the film was released - it ends up as a truly disturbing black comedy about the nature, use, and - mostly - abuse of power, which raises questions that confuse and unsettle that linger long after the film is over.
It's got nothing on The Red Chapel, however, screening in this year's VIFF. A definite descendent of Schroeder's film, but with all the cruelty and fearlessness usually associated with the work of countryman and fellow provocateur Lars von Trier, the film follows Danish director Mads Brugger and a fictitious Danish/Korean comedy duo - which includes a self-described "spastic" with a speech impediment, Jacob Nossell, who ends up the moral centre of the film - into the heart of North Korea. There, they propose to put on a comedy show of epic awfulness, deliberately constructing a grand-scale naked emperor for North Korean audiences to applaud and praise, taking full advantage of the earnest attempts of ideologically-hogtied lower-level officials to liaise with them and intervene in the rehearsals, without ever being able to freely speak their minds. (It would have been interesting for Brugger to shoot similar setups in Japan, China, and South Korea, as a sort of control by which he could factor out cultural elements from his subjects' responses; awful as North Korea no doubt is, at least some of what he criticizes as the result of life in a dictatorship seems more properly attributable to life in a Confuscian, conformist society, not too different from things I experienced in the Japanese high school where I worked). As with Schroeder's doc - as the narrator makes quite clear at the outset of the film - the filmmakers were under obligation to show their footage to the authorities in question - in this case, the North Korean secret police; an opening shot of Brugger reading a book of film criticism by Kim Jong Il is staged with their needs in mind. As with Schroeder's doc, however, the authorities in question had no power to influence how the film was assembled or narrated once the filmmakers left the country, which is where the betrayal could begin in earnest. It's not a comfortable experience in the slightest -where Schroeder stuck a figurative knife in Idi Amin's back, Brugger and crew drop a bomb on an entire country, revealing, critiquing, and mocking the servility and mendacity of an oppressed people, whose regime iron-fistedly pounds them into complicity (but who nonetheless appear to deal with the Danes with a certain amount of misplaced goodwill). It's an immensely brave piece of filmmaking, utterly unique, intensely thought-provoking, funny in all sorts of unsettling ways, and absolutely not-to-be-missed; it climaxes with the Danes participating in an anti-US rally that is right out of Triumph Of The Will. It's possibly cruel and maybe even offensive enough that even fans of Borat might dig it...
Reading Filmbrain's clips from Kim Jong Il's book, linked above, gets me thinking: the dictator really should start an English-language film blog. It would be an excellent propaganda move - especially if he began with a response to The Red Chapel... 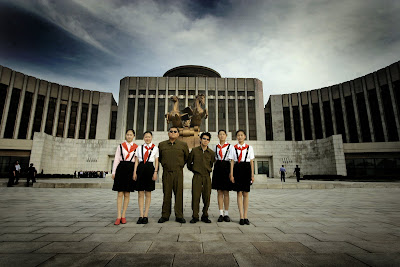