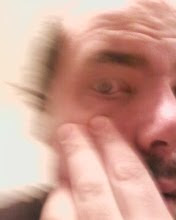 Suddenly - at 3:45 AM - I am awakened with the awareness that I have a (potentially) massive migraine coming on. I can feel pressure in my head - on the right side; I believe this is a new variant, since I used to only get them in the left - and a stiffness and strange "opening" sensation in the back of my neck on the same side, as if all my arteries have become hard highways. My right eye feels blurry and soft-focused ("there's something wrong with my right eye," as the Original Sins - one of the great unheralded Stooges-derivative American bands - used to sing; it's one of punk's best Bible references ever). When I put my hand to my forehead, it feels like the right side is strangely shrunken. There's mild nausea. I realize from past experience that it's only going to get worse, but I lie in bed for fifteen minutes regardless, observing the symptoms, hoping something will derail them. Instead, they steadily grow.

It's been maybe two years since my last migraine (and speaking of religion, that's oddly Catholic-sounding, that). I hate them. At one point a few years ago I went through a week of consecutive headaches far worse than what I'm now experiencing, resorting to vasoconstrictors - the name always reminds me of velociraptors - which clamp down so hard on your circulatory system that heart attacks are included in the possible side effects. Medicinally-used (if not technically prescribed) marijuana seems a preferable resort, but if the migraine comes in the workplace, that's a little inconvenient, given our backwards and uncivilized drug laws, which make it inopportune even to mention if I have resorted to this particular treatment (ever, let alone tonight). By contrast, general painkillers and Advil and such don't seem to do much, but God knows I try them - the pain can get intense and you'll throw pretty much anything at it while you're able to. Alas, a scan of my medicine cabinet proves a complete absence of codeine - I must have brought it all to my parents' when my father was experiencing a lot of pain and discomfort, shortly before his death (ten months ago, now... it seems far more recent). Note to self: bring your codeine back! I pop an Advil, but it's a token gesture. I don't even have any velociraptors around...
A strange last resort, given my depleted weapons kit: coffee - caffeine can interact with migraines in unusual ways, though I know from past phases of relatively intense coffee addiction (when I was drinking eight or nine cups a day) that its absence can also trigger migraines (I would wake up at night, just like now, with a killer headache, and have to throw a coffee at it to make it go away; I don't THINK that's what's going on now, since my caffeine use has been fairly mild lately, but fuckit: I brew coffee anyhow). And just so I don't get nauseated from drinking just coffee on an empty stomach, I whip up a quick burger to have with it, which I devour with two cups of the elixir. And now, at 4:30 AM, 45 minutes in, there's a feeling that maybe this is dissipating - there's a slight sweaty coolness on my forehead that makes me think that, perhaps simply because its run its course, the headache is dissipating. (I realize it's kind of a weird choice to blog my way through it, given the brightness of my computer monitor, but I wanted to distract myself and wax dramatic about my experience as a way of making it pass more quickly).
Guhhh. And tomorrow is the "climax" of the session, with student evaluations to do and all sorts of marking that I simply must finish. Fuckit: caffeinated or no, right now, I'm going back to bed!
Posted by Allan MacInnis at 4:13 AM