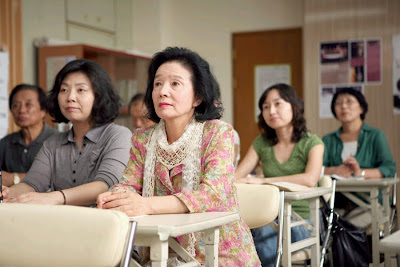 I haven't followed Korean cinema closely. Most of the films I've seen (Silmido, Shiri, Old Boy, The Host) have been blockbusters that took after Hollywood, often using the language of mainstream cinema to explore authentic questions of Korean history and identity (rather than manufacturing consent and perpetuating ideology, the main functions of Hollywood fare). As such, they've been interesting experiences, but also tended to the cruel, and occasionally made me quite uncomfortable (as with the casually brutal rape scene in Silmido, where we get to see how dirty "The Dirty Dozen" really are; or with what seems an unfortunate political subtext to The Host, by which a father unfit to raise a daughter is subjected to an ordeal the end result of which is that he gets to trade her in for a son - a far more desirable state of affairs in Korean culture. I've spoken to Koreans and fellow cinephiles about this and have had a hard time finding anyone else who sees this in the film, but it's a reading I can't escape). Of the directors of the films above, only Park Chan Wook was doing interesting enough things on a thematic level that I chose to explore the rest of his "vengeance trilogy." Which was enough, really; I admired aspects of his cinema, but again, there's a darkness, a cruelty to it - as with the octopus-eating scene in Old Boy, which is perhaps the most disgusting thing I've seen in a film, or the extremely bleak conclusion - that I have a very hard time settling into.
It's refreshing to see a Korean film, then, filled with quiet compassion and insight. Lee Chang-Dong seems, with Poetry, to take after the Dogme movement - not stylistically, but in terms of fashioning a powerful drama out of the stuff of daily life - tho' Dogme filmmakers tend to bring an arch ironic smirk to their stories, channeling both a sense of slight superiority to the melodramas they craft and a hint of outright sadism towards their audiences, both of which are, thankfully, qualities wholly absent here. The story is fashioned of simple elements: an older woman, told she is in the early stages of Alzheimer's, joins a rather middleclass poetry class - the sort where people talk with great sincerity about "beauty." She takes care of a sullen grandson while her daughter works elsewhere, and works to make ends meet scrubbing the house and body of an older man who has had a stroke. When she discovers her grandson's complicity in a crime which has cost someone her life, she enters a sort of moral labyrinth, from which she may be too frail to emerge; the film follows her progress in close-up.
There's not much else I want to say about this film, but it's one of the best experiences I've had of Korean cinema, and will not disappoint VIFF viewers. I feel lucky to have seen two really good films seen so far...
Posted by Allan MacInnis at 6:37 AM