There sure are a lot of movies in the VIFF, and it doesn't help if a reviewer like myself sings the praises of ALL of them. So far, though I've noted a few reservations here and there, I've only written about movies I've enjoyed, so for all y'know, I am shuckin' and jivin' and suckin' up to the VIFF, prostituting my talents like some abased cine-toady, making everything sound equally good. To demonstrate that this is not so, I will now ritually sacrifice an upcoming VIFF film on the altar of my blog. Admittedly, it's a film I didn't finish, but my lack of interest in it was so complete after fifteen minutes that I think that that serves as basis enough for a negative comment.

I like David Byrne, generally speaking. His work with the Talking Heads and his legendary collaboration with Brian Eno, My Life In The Bush Of Ghosts, are well-known and kind of speak for themselves, but there's a lot of stuff in his solo career that I really admire, too. In particular, his 1997 album Feelings is a very, very strong, even surprisingly edgy rock album filled with memorable, exciting songs and provocative, less-oblique-than-usual lyrics (check out "Gates Of Paradise" to see what I mean; make sure to wait til the guitars kick in). 2001's Look Into The Eyeball is a pinch less exciting, but still a good listen; I saw Byrne on two consecutive nights in Tokyo, playing a small club, on that tour, and given the title of the album, was delighted to present the Ultraman monster below to him, putting it on the stage at his feet between songs - whereupon he picked it up, smirked at it, and set it on the drum riser, so it stared out at us for the rest of the concert. 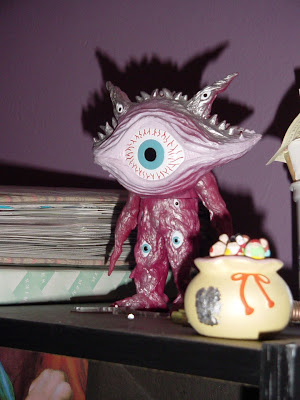 I was incrementally less fond of Grown Backwards, Byrne's 2004 solo album. Replacing rock instruments with those normally associated with classical music, it seemed a little too calculated to carve out a respectable niche in the highbrow art world; the songwriting wasn't bad, but it was just a little tame by comparison with his previous two discs. I rather prefer artists - like Iggy Pop or I, Braineater - who find new energy as they age (since the performances by both men that I saw this century kicked exuberant ass on those I saw in the 1980's). And then Byrne and Eno put out their newest collaboration, Everything That Happens Will Happen Today, and... I just couldn't convince myself that I should buy it. What I've heard and read about it - from friends who admire My Life In The Bush Of Ghosts, or even from critics who mean to praise it by comparing it to the work of Paul Simon and U2, or describing it as "exceedingly pleasant" - lead me to fear that it might just be a lukewarm pop album that will do nothing to sustain my respect for either artist behind it. (I avoid all those bland, unimaginative pop acts Brian Eno sometimes produces, too - I am quite happy to regard him as an adventurer and genius and don't really need to visit him at his dayjob.)

I was still reasonably willing to consider Rise, Ride, Roar for review. A 2010 concert film featuring Byrne onstage with a varied mix of modern dancers - and apparently donning a tutu at one point, though I didn't get that far - it positively oozes a desire to elevate the material, to make an art-spectacle for the mature, moneyed boomer/Yuppie elite, who would likely be the only people able to afford tickets to a stage production this elaborate. It begins - some might say audaciously - with an iconic tune from Byrne's most famous film appearance, Stop Making Sense, "Once In A Lifetime" - a song that I would have preferred left out of the film altogether, not just because it's overplayed; the tune is one of those songs whose original meaning, tied to the context of its creation, has become so vastly altered by time and exposure - I felt this way about pretty much every song John Fogerty sang at Deer Lake Park a couple of years ago - that it is now nothing more than a celebration of its audience, a signifier of status among its fans, and an excuse for nostalgia and audience self-congratulation. I really didn't need to see Byrne proudly perform it again, apparently basking in the greatness of the song as dancers careened about him chaotically. No thanks, Dave; the decision to begin the film with this performance shows that the filmmaker and myself are on very, very different pages as to how to keep a body of work fresh and alive.

I lasted, I think, one more song, a bit of harmless onstage aren't-I-cleverness involving office chairs and a kinda forgettable tune from the recent Eno collaboration, and a sequence explaining the role of the choreographers and dancers. People interested in modern dance might find the dance elements engaging - what I saw seemed too haphazard to really pique my curiosity. There may be performances later in the film that would have engaged me more, granted - but I would rather protect my respect for Bryne's work by not exposing myself to his current trajectory, and if you know what I mean by that, you might want to also do the same.

Granted, the film sounds and looks lovely, so fans of Byrne's recent work will surely enjoy it regardless, and I don't begrudge them that one whit - but I will not be joining them in the audience.

Posted by Allan MacInnis at 7:19 AM