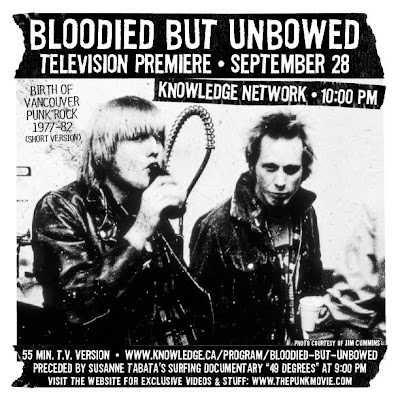 Okay, so - you need to know this to make sense of one of her answers below - after I posted a somewhat critical reaction to the theatrical screening of Bloodied But Unbowed, I got an email from Susanne quoting from one of Gerry Hannah's best-known songs. I guess she expected, from someone who knew what a gargantuan, sustained effort her documentary, chronicling the first wave of Vancouver punk, had required, that I be a bit more appreciative, or at least couch my criticisms a bit. It seemed, at the time, more important, as a contribution to the community, to share my reactions to the film in a totally honest and up-front way. Indeed, I still feel that the rather bleak ending of Susanne's film - or at least the cut I saw - underplayed how most of the bands she chronicles are either reunited or continuing on, with interest in some of them reaching a new high: the Pointed Sticks, Dishrags, and a semi-Modernettes have all toured Japan, while DOA have carried the punk flag into China; the Subhumans have put out one great new album, a singles comp, and re-recorded their "lost" & legendary Incorrect Thoughts; and even Art Bergmann, who seems broken and depressed at the end of her film, has played a show that revealed just how much fire he still has in him, despite all he's been through (quite a fucking lot, on either count). I wanted to see a bit more "unbowed" and a bit less "bloodied" at the end of her film - the ending of the film, which is mostly quite light and funny throughout, kind of sucker-punched me, with it's tales of heroin, prison, death, and terminal disappointment.


At the same time, don't get me wrong - as anyone who tunes into the Knowledge screening of it on the 28th can attest - Bloodied But Unbowed is an utterly vital - and very funny and entertaining - contribution to Vancouver punk historiography. I'm glad that Susanne has mended bridges with me - I mean, what the fuck was I gonna do with the Bloodied But Unbowed t-shirt I bought? 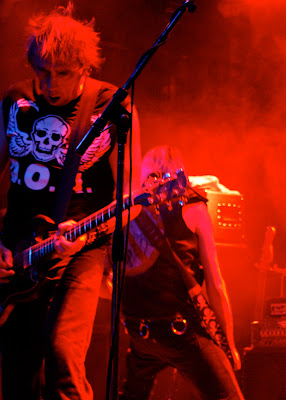 DOA's Joe Keithley with Randy Rampage, circa 2008. Photo by Cindy Metherel, not to be reused without permission.


Note: for those of you not up to speed, during the shooting of Susanne's doc, DOA's Joe Keithley fired original bassist Randy Rampage for the third and apparently final time, a few gigs short of their 30th anniversary concert at the Commodore - something not mentioned in the doc.

Now that we're all on the same page, here's a quick email Q&A with Susanne Tabata about her film.
Susanne: Good afternoon Allan. UNFUCK YOU.
Allan: So you ultimately decided to leave the issues between Joe and Rampage out of the film.
Susanne: That IS another film. And it's shot. 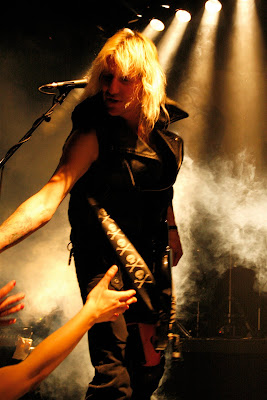 Randy Rampage, photo by Cindy Metherel. Not to be reused without permission.


Allan: How did that falling out affect your film?
Susanne: It definitely stalled and derailed things for a short while. It was hell. We were going to use present day DOA to springboard into the past. And use that as a through line. But when Rampage was gone from DOA, that was impossible to do. I salvaged one two shot of Shithead and Rampage and it's in the final cut - and it's real good. The Bob Rock sessions of DOA's 30th were connected to our documentary at one point. There are small remnants of it in the one hour tv version. So that recording project went out the door with Joe's own 30th anniversary DVD. It sent us in a different direction. BUT a better one as that's when I went to visit Mary-Jo.
Allan: You've received a bit of flak - from me as well - for ending the film on a down note. Care to rebut?
Susanne: I appreciate your honesty. So UNFUCK YOU which is why we are talking today.
This is a film with a narrative arc and while it's meant to be informative, the scene construction is supposed to take you on an emotional journey. A loss of innocence. When Art says " history is not written by the losers. ... No one talks to the musicians. If you don't make it you don't count," a lot of people can relate to that. These folks laid the foundation in this city for an independent music scene. Most of them didn't prosper from it. Let's just state that before punk got co-opted by big business - and got sold back to the masses - this story took place.

The bureaucrats who fund Canadian culture were none too interested in this film and it must have caught some by surprise when the mainstream writers - in particular every major in Greater Vancouver (Mackie, Harrison, Rowland, Kissinger, Zillich, Usinger - praise them all) - ALL took arms with the greater message that Vancouver punks finally get their due. 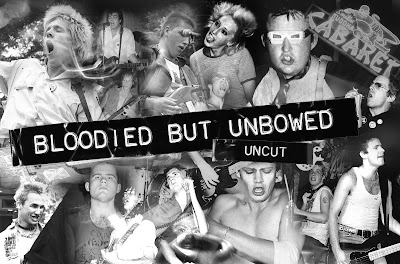 (Poster for the theatrical screening)

Allan: One thing I was really, really impressed by in the film was your ability to get very candid, open interviews with people. Everyone seemed to trust you and feel comfortable baring their souls. Having interviewed a lot of these people before, I was a bit jealous at how GOOD the stuff you got was! ... So: how did you approach interviewing people?
Susanne: I like to work alone or with one other person. The approach varies depending on what you are after.
Allan: How much unused interview footage is there?
Susanne: 100 hours at least. 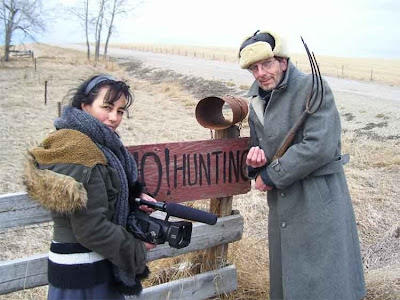 Art Bergmann with Susanne Tabata. Photo by Randy Rampage, I think! Not to be reused without permission.


Allan: Who was the most difficult interview?
Susanne: Most difficult: Art Bergmann
Most difficult ( not in the tv cut ): Penelope Houston. Never never interview someone just before a show! She is the only interview I would consider a do-over.
I chose the cast. And they are individuals. I think the question is "who was the most difficult?" They took their turns. The 48hr weekend at my place with Zippy, Brad and Randy was difficult because it wouldn't end.
Allan: How have you re-cut the film for the shorter Knowledge screening?
Susanne: The Knowledge Network one hour was submitted before the festival cut was edited. So the tv hour was top priority. We have modules - self contained stories - on a number of chapters. And we talk about sequences as a team. Knowledge did have input in terms of asking for clarity on a couple of tweaks we did to tighten the show. Bodies have hit the floor. You didn't like 75 minutes? You'll hate 55.
Allan: What are your plans for a DVD release?

Susanne: We are collecting addresses and names on thepunkmovie.com. Once we get two other interviews into the show and work out 'fair' music licensing - almost done - we're pretty much there. For an extended version. We don't have a distributor at this point and want to hit some festivals in the US, Berlin, Tokyo. So the DVDs might be limited to certain territories depending on the nature of a foreign tv sale. Or something like that.
Allan: Tell us about the Toronto-Vancouver smackdown...
Susanne: Colin Brunton - who is a cog in the wheel of the Canadian tv establishment - is making a similar documentary on the Toronto scene from the same era. He's got a flair for comedy or at least has hand in a lot for getting good people to work for him - has a doc coming out called The Last Pogo Jumps Again. He had his robots watching our activities here and shortly after Bloodied But Unbowed got turned out at the Toronto International Film Festival for being 'too local', he remarked on my fb. So bring it on, early next year, the two cities are going head to head in a showcase.
--


... and that's all she wrote! Those of you without TVs or cable are urged to find a friend or relative who has one for the evening of September 28th. Those of you with TVs are urged to invite a friend who doesn't - it's a community event, after all. If you missed the theatrical screening during the summer, don't miss this one!

Posted by Allan MacInnis at 9:38 PM