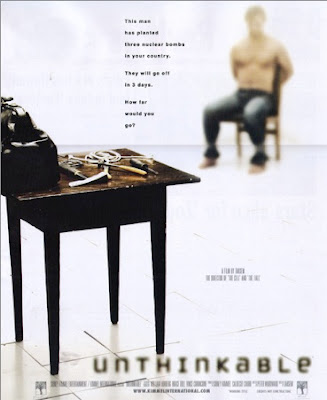 Just watched this as well. I guess it all depends on that crucial caveat - "for what it is."

The principles ARE great (I also like Stephen Root but I differ on Moss), but the film ends up awash in too many "oh no you didn't just do that, Samuel Jackson!" moments.

You have the terrorist, the torturer, and the two agencies. Add a straightforward plot with references to recent headlines. Okay.

So why waste so much time with a second set of functionally similar characters and their extended families? It just clutters things and results in too many unconvincing, cartoonish, and occasionally precious moments as these characters swoop in at random with no rationale. Like the children hugging Moss (*shudder*) or the crazy gun wielding bureaucrat.

This is a pretty low budget film (rent a high school). Unthinkable's greatest strengths should have been a small cast (read: Jackson), a personable protagonist, and a series of increasingly ambiguous dilemmas. Instead, it meanders and stutters a bit too much, even for what it is.

Didn't think it "meandered" or "stuttered" much at all - the gun weilding bureaucrat was pretty silly, it's true, but I think I liked it a bit more than you... As mainstream thrillers go, it's one of the better ones I've seen this year...

...but it doesn't seem to merit THAT much discussion, so...