Blog The Night Away: in which I stay overnight on the streets of Vancouver to see Eugene Chadbourne play 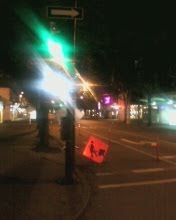 (Written early June 3rd, edited and posted June 6. Rewritten again on June 7, because I can).

So here I sit: all roads lead to a Korean net cafe on Robson Street. It is 3:04 AM early Thursday morning as I begin this. I go to work in five hours, just a few blocks away. I elected, last night, to stay awake after the Eugene Chadbourne gig, rather than risk the costly, difficult, and likely none-too-restful alternative of trying to commute home to Maple Ridge.
It's something I've considered on a few occasions since I relocated to the burbs, on those odd nights when a concert is happening that I feel I simply cannot miss: stay awake all night, go to work in the morning, deal with the consequences. Other options - impose on friends, pay for a room, sleep on the street - all have complications attached; the independence of just foregoing sleep for a night has its appeal, assuming I can make it through til noon. The last time I attempted anything like this in the name of music was when I saw Joe Strummer and the Mescaleros in Tokyo at the Akasaka Blitz on the Global-a-Go-Go tour, in 2001 or 2002...
Tokyo is really a better city for doing this sort of thing than Vancouver, tho'. By contrast to the empty streets outside as I type, at 4am, the streets of Shinjuku are full of life: you see salarymen passed out in doorways, some apparently intoxicated, others seeming merely to be napping as they await the first train home to the 'burbs. Kids walk arm in arm down the alleys. The few 24 hour cafes and fast food joints are filled with similar teens and 20somethings, curled around each other cutely, totally asleep, the staff doing nothing to disturb them. If you can't find a seat to sleep in of your own - because they're packed - you can try your luck with the salarymen outside. If you fall asleep in the wrong doorway - in front of a well-lit corporate building, for example - you will likely be awakened by security guards and told to move on, but not too roughly. It doesn't matter much: if you're creative, there are all sorts of places to huddle (check for urine first)... there to sit and count taxis like you might count a parade of real live sheep, rolling by at a ratio of a dozen to one against non-taxis, until the trains start rolling back to, say, Saitama around 5AM. Nodding in a doorway counting taxis is a small price to pay for the memory of Joe doing "Message To You Rudi" and "Blitzkrieg Bop" among his encores.
I also have no regrets about having stayed to see Eugene Chadbourne at Lick, as part of Music Waste last night. It hadn't been my plan to stay all night, mind you, when I first showed up at the gig; but the set had been delayed by 45 minutes by the Music Waste/Fake Jazz organizers, who, having promised publicly that Eugene would go on at 10 sharp, nonetheless felt free to reschedule the start of his two sets to 10:45. (As a point of interest to the people responsible for that decision, if you'd kept to the promised schedule, I would be home in bed right now, as I had planned to be... or alternately, if you'd let it be known in advance that the set would be delayed, I might have made sleeping arrangements, either of which would have been kinda preferrable to this "experiment" I'm now undergoing... but grr, fuggit, thanks for bringing Eugene back, anyhow!). 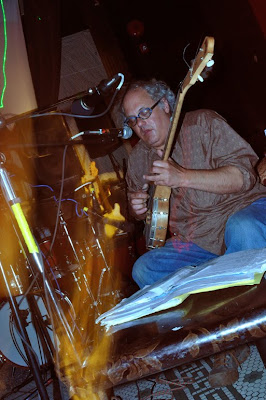 Eugene 2010 by Femke van Delft, not to be reused without permission

At 10:45 sharp, Doc Chad began his set without waiting for people to quiet down, doing solo banjo as younger folk ran around with wires trying to mike him properly, letting the room slowly get drawn into what he was doing. It was the most "traditionally Appalachian"-seeming set I've seen him do, and certainly some of the most exciting banjo playing I've heard anywhere, comparable only to other times I've seen Chadbourne play banjo; it really brought home how great a musician he is, and how privileged we are to have been there watching him. Songs that I recognized included "People Will Vote For Whoever Gives Them Food" (which you can find on his House of Chadula CD Rebuild New Orleans In Iraq) and "The Old Piano." The latter - meditations around an unused piano - reminded me of Doc Chad's thoughts a few posts back on how many communities used to actually have live music, a tradition that has gradually been erased or thinned out by the advent of television, the internet, and so forth; it was possibly the saddest song of the night, though the sadness occurs at a depth that some folks might not notice...
Afterwards, Darren Williams and Kenton Loewen joined him for a jam session, nowhere near as amazing as Doc Chad's solo set but still interesting, despite a certain amount of push-pull involved, as the trio sought common musical turf to explore. Darren and Kenton had to struggle a little to enter and maintain the structures that Chad seized from the swirl and built into songs - songs which may have been country tunes in some previous incarnation, but took on a distinctly R&B feel, given the addition of saxophone (some may well have been spontaneous compositions by the Doctor, I really don't know). Williams had confessed in my Straight interview his lack of fluency in the idiom of country; he and Kenton, thinking more like jazzsters than songsters, tended to follow his solos into chaos rather than keeping up the structures Chadbourne had developed and letting him play off them... but regardless, by the end of the night, Darren and Kenton were much, much better at playin' R&B, Chadbourne style, than at the start.
On the other hand, I'm not sure how at home Eugene felt playing the Ornette Coleman piece. It was the second time out of six Doc Chad shows I've seen, after Aki Takase's Fats Waller Project, that he looked to be referencing sheet music; I assume that it might have been a bit constricting to him - it certainly was constricting to me as a listener/fan, since I'd much rather hear what Doc Chad can DO with an Ornette Coleman piece when NOT following notes on a page. (A lot of the delight in Chadbourne's covers lies in his digressions or his total reinventions, like, say, his banjo adaptation of Mingus' "Fables Of Faubus;" it's recognizable as the Mingus tune - actually quite faithful - but the very fact that it's being played on a banjo is half the fun. One imagines Mingus would never have seen it coming, but would laugh happily in approval). All three musicians seemed relieved to arrive at the improv section of the Coleman piece - certainly I was! Finally the trio was able to explode with conviction and enthusiasm, manifesting magnificently tempestuous freakouts on secured common ground. It was, in short, as beautiful as a hurricane...
It was still really all about seeing Doc Chad again for me, tho'. The closer, "That's The Way Love Goes" - was one of those highly emotionally compelling American songs that I probably would never have encountered were it not for his arrangement of it (I'm assuming it isn't an original, and that it bears no relation to the Janet Jackson hit. I'm told that Willie Nelson might've sung that one... I'll have to ask around...). At the end of it all, I felt really, really happy to hear people cheering loudly - presumably many of whom had never heard the music of Eugene Chadbourne before. I was happy they "got" it - little things like that keep my faith in humanity afloat, y'know? 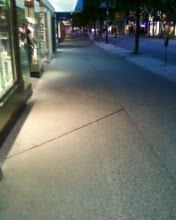 Robson Street around 4am by Allan MacInnis
The rest of the night was spent wandering the empty streets, trying to get photos of west end skunks, ducking divebombing crows, and/or just killing time in a Blenz, nursing a Shizuoka Genmaicha, reading Charles Willeford's Pick Up, and trying, as an exercise, to transcribe the lyrics to a Melvins song (why are they so damned hard to figure out?). I'm thinking, based on how tired I am, that come the Melvins show in July, I'm going to have to make some sort of sleeping arrangements. However interesting it may have been, I don't think this all-nighter-in-the-city thing is that workable a way to continue seeing live music... 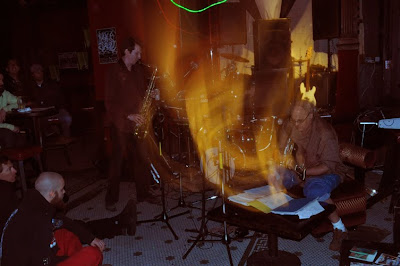 Eugene 2010 by Femke van Delft, not to be reused without permission

By the way, a happy Chadbourne Anniversary to Femke van Delft, whose show will continue to hang at the Railway for the month of June (see below). Some terrific photos of mostly local musicians - both hanging and in her binders - also including George McDonald of the Melodic Energy Commission, playing his theremin; Randy Rampage, back when he was still with DOA; Chris Arnett of The Furies; Mark Berube, looking quite strikingly like a young Tom Waits; the amply-tattooed Ani Kyd, and... well, too many for my still-sleepy brain to do justice to, but check'em out sometime!
Posted by Allan MacInnis at 3:02 AM