To Sleep, Perchance to Breathe...

Thanks to the mysterious workings of search engines, the most commented-upon post in the history of my blog is "I Hate Downtown: a Rant," a frustrated bit of bile-spilling about the quality of life in downtown Vancouver - which saw increased action this past February, for some reason. It turns up near the top, or, depending on which engine you use, right at the top, of searches for the phrase "I Hate Vancouver," so people pissed off with the city and turning to the internet for comfort and camraderie are directed there time and again. I feel a bit bad about how negative and borderline racist some of the comments are, since there's a lot I actually like about Vancouver, and the large Asian population (whom I work in the service of) is not really the main issue for me, as it is for some commenters... but the post serves a useful social function, I guess, if it helps people feel their dissatisfaction with life here doesn't reflect badly on them, and gives them an opportunity to release some pent-up tensions. Plus I suppose it's kinda fitting that it be my most popular thread, given my blog's name.

Interestingly enough, the second most commented-upon post in the history of my blog deals not with weird music or film culture in Vancouver - the main two areas I tend to focus on - but with a medical condition I suffer from, sleep apnea. Again, thanks to search engines, it turns up near the top, or right at the top of searches, making me some kind of authority on the topic of "Sleep Apnea and Ear Infections."

Apnea, of course, is a potentially fatal breathing problem that affects people when they are sleeping, if our nasal passages are too narrow and our throat muscles too flabby to stay open and allow us to breathe comfortably. The main effect of apneated sleep is loud snoring, punctuated by periods where breathing stops altogether and the sufferer gasps and struggles to breathe; if you know someone who snores, you may have heard them do this. Without treatment, apnea sufferers tend to wake up repeatedly at night; night sweats, increased urination at night, and tiredness during the day are other markers of the condition, which is particularly prevalent among the overweight. The main treatment is a CPAP machine, a rather expensive shoebox-sized piece of medical equipment that sits at the head of my bed.

To briefly recap the main point of the post, since going on CPAP some seven or eight years ago, I discovered that use of my machine - which has a mask that fits facehugger-like over my face as I sleep, blowing air up my nose and keeping my airways open - seems to have led my having several ear infections. I used to have ear infections regularly in my childhood, particularly in my left ear, but hadn't had any for some twenty five years, prior to going on CPAP. After going on CPAP, ear infections once again became a regular part of my life, happening every few months or so and leading to tinnitus and a significant loss of hearing in my left ear, which scared the hell out of me (but which, thankfully, I was able to repair - a lot of the problem was caused by fluid buildup in my eustachean tube, which could be vented). I can't prove any connection between CPAP and my increased frequency of ear infections, and most ENTs and CPAP salesmen you talk to won't have heard anything about it, but I firmly believe there is one, based on my own experiences; and it simply makes sense that air blowing about in my ear-nose-and-throat chamber might affect sensitive tissues and/or move bacteria about inside my head. As I describe in that post, the only solution to the problem I could find that seemed to work was to lower the settings on my CPAP machine, so that I could still breathe at night without irritating my inner ear; since turning it down - to a setting of six or seven - I have the odd night of apneated sleep (waking with sweaty pillowcases and a decidedly unrested feeling) - but I haven't had another ear infection. It's not exactly a solution to all that ails me, but I can usually breathe okay at night - falling asleep and waking with the feeling of air comfortably flowing up and down my nasal passage - and my hearing is stable again, so I guess it will have to suffice.

The problem is, when I have a cold, and my nose is plugged, I'm screwed. I put on my mask, wrap a velcro'd and elasticized cloth around my head to keep my mouth from popping open and letting the air escape, and turn the machine on - and I try to breathe. Either no air goes up my nose, or so little that I feel like I'm suffocating. My only options would be to crank up the machine - consequences to my ears be damned! - or to take off the mask, which means sleeping badly, snoring all the while, and waking with a sore throat in the morning... which is not exactly something one wants to do, if one has a sore throat to begin with.

Like now, for instance. I sun is up, and I haven't bloody slept at all; my nose is completely plugged; and my throat hurts. I've been tossing and turning, putting on my mask and pulling it off, for three hours, with no positive results whatsoever. So I thought I'd kill a couple of hours sitting up and complaining about it.

That's all - I just came here to complain. Now I guess I'll go turn on my kettle and inhale some steam, in the hope that it loosens me up... 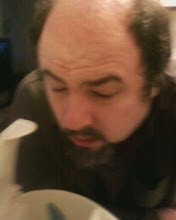 Posted by Allan MacInnis at 3:39 AM

I found your post really interesting and it has really improved my knowledge on the matter.