Of snakes and bees

I turned over a board in a ditch today. It was a good board and a dry ditch, and it seemed likely, if my childhood instincts still apply, that there might have been a snake under it; I couldn't resist. I was walking home from the train station, with nobody watching, so I negotiated my way down the slope and quietly approached, hand extended...

Do understand: it's not that I've returned to catching snakes - a fine pastime of my Maple Ridge childhood that I suspect cannot be easily returned to, since many of the fields where I once sought my captures are now paved and townhoused; the last time I saw a snake in the wild was on a hiking trail on Bowen Island, maybe three years ago. No: I wanted to photograph a garter snake in my hand with my cellphone to show my Mom, who rather despises the creatures (and had to struggle with my keeping them in my room as a kid, especially when they managed to escape). We could have had a moment of nostalgic fun over such a picture. Plus I admit a fondness for that reptile smell they slime you with, and a desire to be brought back to my childhood by it, that those powerful olfactory sensations might make this town, which I resist so much, feel more like home. (There's nothing like snake slime to make the suburbs more palatable).

Unfortunately, there were no snakes under the board. A small spider, a slug, some rotting grasses; nothing worth taking a picture of. However, there are a few bees about that were willing to put up with my phone. 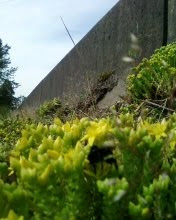 The straggling survivors of an apparently decimated species, the few bees that you see these days are almost always bumblebees. On rare plants, you still find honeybees, but these are few and far between. In my childhood - when I used to catch them in jars, before I moved up the food chain to snakes and frogs and salamanders - there were bees everywhere, no patch of flowers untended, or so it seemed. Now - and I wonder if this is connected to whatever force is behind Colony Collapse Disorder - it seems that vast numbers of flowers go completely beeless, while other particular plants are abundantly staffed, almost as if there was something in certain plants the bees were trying to avoid, or something in other plants they singularly needed more of. Maybe it's just a matter of taste on the part of the bees, but I still suspect, for all the talk of parasites, that GMO's have a role to play in this ongoing overlooked calamity; when I see a flowering shrub with not a bee on it, I feel a small quiver of apocalyptic dread, while finding another shrub that has many makes me hopeful that the ecosystem might be okay after all.

Anyhow, in lieu of a snake, here's to the bees! Gambatte, bees! Keep up the good work! 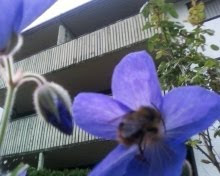 Posted by Allan MacInnis at 8:40 PM