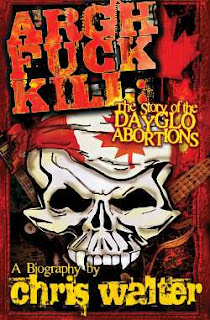 Heyo - y'all know that Chris Walter's booklaunch for Argh Fuck Kill: The Story of the Dayglo Abortions is on Friday at the Biltmore, right? (Not that it's very big, but I spoke to him about it for the Straight, here). The lineup includes Mr. Plow, SNFU, and, of course, the Dayglo Abortions (whom, horror upon horror, I must confess to never having seen, not being entirely embracing of their at times highly - erm - "politically incorrect" humour; actually, I have no idea what he's singing, but a song called "I Wanna Be East Indian" just... can't... be okay...). As we have seen, seein' shows is a bit of an ordeal for me, these days, but I might see what I can manage with this one... By the way, there's a fairly entertaining vintage news clip on Youtube about the 1980's obscenity case surrounding the second and third Dayglos LPs.
(EDITED NOTE OF IMPORT: THE FOLLOWING SENTENCE IS COMPLETELY WRONG, FROM WHEN I THOUGHT THE RON REYES GIG WAS IN JUNE. IT AIN'T. IT'S ON SATURDAY, JULY 24th AT THE RICKSHAW. SEE ABOVE FOR A BIT MORE).
Also happening of note will be a show at the Rickshaw on Thursday, which I most likely won't be attending: Ron Reyes 50th birthday party, featuring I Braineater, The Modernettes, the (thoroughly delightful) Little Guitar Army, The Jolts, and, 'tis rumoured, an appearance by the Ron Reyes Band. If any of you have somehow missed the story of Reyes, I guess Wikipedia is a decent place to start. You might have seen him credited on Black Flag albums as Chavo, or Chavo Pederast - which I always took to be a normal punk name, tho' I gather - if the Wiki page is accurate - that he doesn't care for it much. You can find some of his early vocals on Black Flag anthologies to this day - he sang the version of "Jealous Again" that most of us know best, f'rinstance. I'd rather listen to Reyes than Rollins, these days!
...tho' a gig on a Thursday is a bit of a longshot for me... Tho' I'm stayin' in town ANYHOW for the Rod Filbrandt booklaunch (see below). Hmmm.
Well, we'll see.
Posted by Allan MacInnis at 11:24 PM