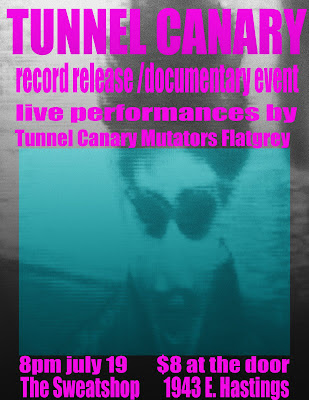 The major piece of mine in the new issue of the Skinny will be on Tunnel Canary, a band that would be considered a legendary part of the Vancouver underground music scene in the late 1970s/ early 1980s, if only more people remembered who they were. No time to write about' em at length here, suffice to say that my interview with Nathan in the Skinny is one of my favourite things I've done so far this year, and that I highly urge those curious about experimental music to check out:
a) my piece in the Skinny, not yet online. 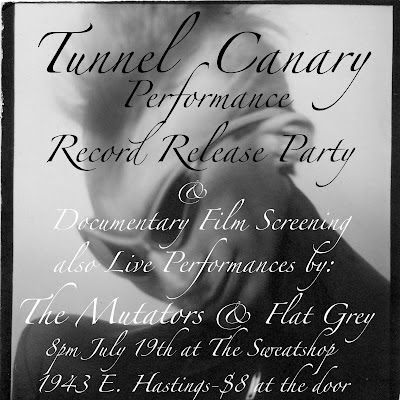 b) Tunnel Canary's record release show at the Sweatshop on the 19th, which will also feature a screening of Eric Lohrenz' documentary on the band, including wild footage of Nathan Holiday, their guitarist, and original vocalist Ebra Ziron, doing an aggressive and scary "street theatre" piece at the corner of Granville and Georgia, as a crowd of fascinated, intimidated people look on. The new version of Tunnel Canary, performing at the event, will feature a different vocalist, Mya Mayhem. The Mutators and Flatgrey will also be performing. There are two LPs versions of the record coming out - a single and a double - including stuff already on the Jihad CD, and previously unreleased material. Contact Josh at Run Down Sun for ordering info. (Their Myspace is here, btw).
c) And if that leaves you wanting more, Nathan will be performing again at Blim on the 25th, I believe, again with a screening of the documentary.
Meantime, aren't these gig posters cool? 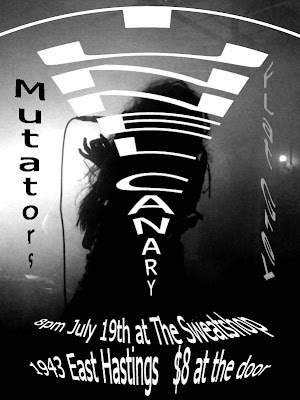 Posted by Allan MacInnis at 7:54 AM