Jonathan Richman in Vancouver: Here There be Jackasses 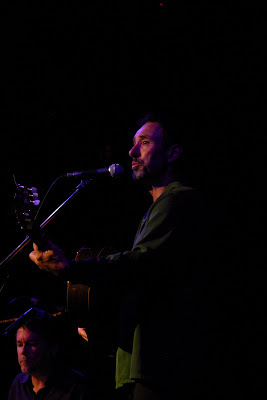 Jonathan Richman continues to mature and evolve as a songwriter and performer. Gone are the days of rather silly and childlike tunes like "Abominable Snowman in the Market;" they've been replaced by deliberately simple, sometimes almost embarrassingly direct and sincere, but very serious and moving meditations on experience. Songs with joy and life and humour in them - he's no brooding "suffering artist" - but also considerable wisdom; for instance, "He Gave Us the Wine to Taste It," off Not So Much to Be Loved as to Love:

Interesting advice for a critic to encounter, but I couldn't keep myself, even as he was singing this very song, from scribbling notes about Jonathan's performance at Richards on Richards last night, where he played with drummer Tommy Larkins and an extremely minimal setup (two microphones, a drum kit, a strapless acoustic guitar, a few percussion instruments for Jonathan to toy with, and cables feeding into what I guess was Jonathan's own mixer, leaving the soundman - he complained after the set to anyone who would listen, which was mostly my friend Kevin and I - with nothing to do). It was a very strange and unsatisfying experience, but I'm not sure how much of the blame should be placed at Jonathan's feet. The problems were manifold:

a) For some reason, Richman, whom I'd always thought a cult taste, attracted a vast horde of 20somethings to the show. Why? Some surely were real fans drawn by his legendary work with the Modern Lovers, or loyal listeners of his later output - which I tell myself shouldn't have been a problem; "real" fans surely would know how to listen, how to be attentive and respectful, right? But a vast number of the kids packed into the full Richards on Richards must have known him only peripherally, from his appearances on Conan O'Brien or in There's Something About Mary, or just have gone because they'd heard it was the place to be that night, because:

b) said kids, for the most part, didn't listen worth a damn to what Jonathan was doing. Sure, they sang along enthusiastically, when invited by Jonathan to join in, to "I was Dancing at the Lesbian Bar," or his delightful anti-cell phone song ("You Can Have a Cell Phone if you Want," I guess was the title - followed in the chorus by "but not me," Jonathan explaining that if he wants to walk, he wants to walk, and you can't call him there, or anywhere else that he goes when he's not around a phone. As a non-cellphone user - I very nearly loathe the things and the transformations they've had on people's behaviour - the song was very pleasing, though I didn't join in the choruses, myself). They cheered his little dances or his flourishes as he spun the guitar or picked up a percussion tool to twirl or shake or bang. But these same kids also screamed his name, yelled requests, whooped or hollered like assholes, or did other such annoying things while he was trying to sing the songs, cheering him with such fervor between or sometimes during numbers that it started to seem a bit ridiculous ("like he was the fucking Beatles or something"). And of course, this was happening at Richards on Richards - the loudest, most "glass-clinking" establishment in the city, where everywhere you go, you're surrounded by drinking talkers and talking drinkers, who are paying no attention to the songs; or you're forced to listen to too-audible transactions at the too-close, too-open bar. It was no wonder Jonathan's face looked a little haggard, or his wide, deerlike eyes seemed a tad puzzled at times; what can you do with an audience that loves you so much that they threaten to dwarf and crush you, so that everything that is gentle and reflective about your music is bludgeoned down and the event turned into some noisy festival of narcissistic celebrity-worship and idiotic acting-out? Whatever Jonathan does or is was so overwhelmed by what the kids in crowd needed or wanted him to be (or their flat out need to get loud) that the disjuncture was at times painful to behold.

c) And this just wasn't a source of irritation to the more mature or older audience members; it was clearly a source of irritation to Jonathan, as well. Several times, he greeted too-loud cheers with what Kevin suspected were ironic reprises, meant to tease the audience a little, as if to say, "Okay, if you like it THAT much, here it is again." When he came onstage for the encore, he was greeted with minutes of screamed requests that lasted so long, were so loud and rude and selfish that it left him speechless and silenced, staring out at the crowd somewhat unbelieving as it went on and on. It could have been boos or curses, for how aggressive it all seemed; it was completely out of step with the tone of his songs. I wondered what he could be feeling, but then he told us: he shrugged and said, "I might as well go!" And then made to walk offstage. The cheers and hoots and bellowed requests faltered a little, but when he walked back to the microphone, they renewed again at full force, such that he had to make a second gesture at leaving the stage ("I was going to play you another song, but...") before people calmed down enough to hear him. Whereupon he did two numbers that in their own way seemed to upbraid the audience - one about how his baby loves him even more than he prayed (a problematic condition indeed!); and another - which finally shut people up - about the death of his mother, "As My Mother Lay Lying" off Because Her Beauty is Raw & Wild, his newest recording.

I kept thinking throughout the night how much I would have loved to see Jonathan Richman perform in a small cafe to a crowd of respectful, attentive fans, say in the manner of the Minimalist Jug Band/ Petunia show I saw at Slickety Jim's awhile back. I don't care for everything Richman does (I don't really need to hear his observations about painters he loves - though I also admire Vermeer; and his Spanish and French songs didn't make much of a mark on me, though I rather liked the idea of telling a story in Spanish about a 19 year old boy who doesn't want to be at the bordello that his friends have dragged him to - it was nice of Jonathan to at least explain it a little to us). Some of his more slice-of-life songs might have worked better if the roar of the audience hadn't kept me from really entering his music. As it was, it was only his most philosophical moments - his cover of Leonard Cohen's "Here It Is," or "When We Refuse to Suffer" - or his most emotionally charged and complex numbers ("Let Her Go into the Darkness") that cut through the cheers and hoots to really leave a lasting impact. (I liked, too, what Kevin and I agreed was a "revisionist," quasi-flamenco version of "Pablo Picasso" - Richman using the song as a teaching tool, to tell audience members not to worry if they aren't handsome or beautiful; look at Picasso - short, bald, unimpressive to the eye, but confident and charismatic and compelling, and a success with women, because of who he was and how he felt himself to be. A nicely-made point, if rather different from the original). As it was, though, I spent more time gritting my teeth and wincing - and feeling bad for the people on the stage - than I did enjoying myself. What a shame!
Maybe we should raise the drinking age?
Posted by Allan MacInnis at 4:49 PM