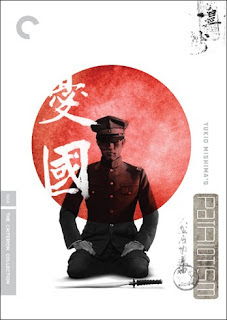 The most interesting new DVD that I'm aware of is a film directed by Yukio Mishima, Patriotism: The Rite of Love and Death. Mishima was, of course, a Japanese novelist of considerable complexity: narcissistic, widely described now as homosexual (though this is not uncontroversial, especially in Japan), obsessed with physical perfection, and immensely prolific and gifted as a writer. His ideas, too, are complex - he is fixated in some of his later works on idealistic youth who die young, for a cause, which seems to carry an erotic charge for him. As he grew more successful, he organized a small right-wing "shield society" around him, drilling them as bushi; the right wing and militaristic factions in Japanese life saw him, for the most part, as an ally - until, in 1970, after completing his masterpiece (the Sea of Fertility tetralogy), he and his private soldiers took over Jeitai headquarters - Japan's "army by another name" - where Mishima insisted on addressing the troops, holding one man hostage as he argued for a coup to restore the Emperor to his former glory. At the end of his speech, which was met with jeers, he disembowelled himself. As is customary, one of students hacked off Mishima's head (it actually took two of them and several tries) with a sword; a friend in Japan tells me she still remembers the shock of seeing his severed head on television.

It is my impression that Mishima became somewhat of a complex embarrassment for many Japanese thereafter.

Now: Paul Schrader's film about Mishima - Mishima: A Life in Four Chapters - is definitely an interesting experience, and worthwhile; it has also received a Criterion release this week. It restores the Roy Scheider narration mysteriously absent from the previous DVD edition, has an excellent 55-minute long BBC documentary on Mishima, and an essay about why the film was banned in Japan, among other useful extras. Perhaps because I've seen Schrader's film so many times before - and because I've grown a bit weary of his obsessions - the must-see, between these two releases, for me, is Patriotism. In highly stylized, spare black and white images, the short film - just under half an hour - deals with a Lieutenant, played by Mishima, who is torn between his loyalties to a group of young idealists who have attempted a failed coup, and his duty to obey the Emperor, who has ordered the coup be put down. With no other way of reconciling himself, he decides he must die; his wife, Reiko, vows to die with him. They spend a last night together, making love, then come together under the banner that dominates the minimal, Noh-like set, which reads "Wholehearted sincerity." (These characters confront the viewer through much of the film). The climax of the film is bloody and uncomfortable, but also oddly like a lecture - Mishima using his own imagined hara-kiri to upbraid his viewers for their decadence, their laziness, their love of comfort. (He is shown in an interview also on the disc saying with a slight smirk that despite such moments in his work, glorifying ritual death, he would probably die old in his sleep, a death, he felt, with no dignity or meaning). Since similar motifs appear in his writings - in the short story from which Patriotism is drawn, or, most significantly, in Runaway Horses, the only Mishima novel I have in fact completed - it seems bewildering that anyone would be surprised by Mishima's choice to actually kill himself as he did. After his suicide, Mishima's widow made sure all existing prints of the film inside Japan were destroyed, and it was only after her death two years ago that the negative re-surfaced; this is the first time this very striking and uncomfortable film has been widely available in North America. If you think, based on the above, that you will be interested - you will be; it is compelling indeed, and a very nicely-priced Criterion title, at $19.99, complete with a booklet that contains a critical essay, an account by Mishima on the making of the film, and the story itself. Not to seem like I'm encouraging anyone to shop, but this is a pretty impressive offering.

PS: My buddy Dan laughed aloud when I described Mishima as "the G. Gordon Liddy of Japan," and insisted I make mention of it here... So I just did!
Posted by Allan MacInnis at 10:32 AM