A Great Summer to be a Cinephile in Vancouver 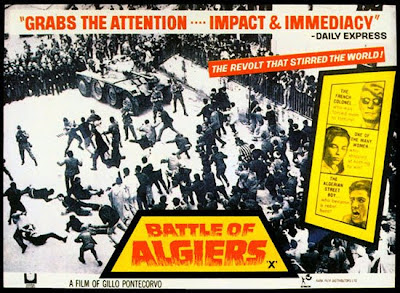 Hey, y'all. Looking like an exciting summer, filmwise (it's almost like the Gods noticed that I haven't been going to the movies that much lately and set about to influence the VIFC's and Cinematheque's programmers into putting together a two month program especially for me...).
Tuesday, July 8th: George Bowering, Canada's poet laureate, will be introducing The Battle of Algiers at the Vancouver International Film Centre, as part of the Cinema Salon series. Pontecorvo's film is a serious look at the use of guerrila tactics, terrorism, and torture in the quest for Algierian independence from France. It is remarkably timely and extremely compelling; members of the Algerian resistance participated in the making of the film.
Also next week at the Vancity, there will be a series of American independent films, including two features by Andrew Bujalski. I haven't yet seen Funny Ha Ha, so I'm really keen on that. Mutual Appreciation, starring "that guy from Bishop Allen," Justin Rice, definitely bears the mark of Cassavetes' influence, but where Cassavetes' characters erupted and struggled and exposed themselves in all their rawness for all to see, Bujalski's young neurotics pace in tense little circles, wincing and cringing and hiding - often embarrassing themselves and the audience, but seldom getting to really cut loose of their oppressive self-consciousness. The film is very funny, but also squirm-inducing... and there ARE a couple of songs in it, which are fun to hear, though I don't know Bishop Allen's work well. I also don't know any of the other films in the "Generation D.I.Y" series that these are playing in, but I will probably check them out. (The term "Mumblecore" kind of annoys me, btw).
The Cinematheque, too, has some very exciting fare. I admit that I'm more excited by the prospect of seeing Andy Warhol's film about the Velvet Underground on the screen than I am by Philippe Garrel's meditation on his failed relationship with Nico and his heroin addiction, J'Entends Plus La Guitar - but they play as a double bill on a couple of nights (July 12th and 17th). Maybe I should buy advance tickets for this one? You can also catch the Garrel film in a double bill with Godard's Vivre Sa Vie, but while I like many filmmakers who have been influenced by Godard - Reg Harkema and Gregg Araki, in particular - my last attempt to watch one of his films, La Chinoise, left me with a bit of a headache, which is not the only time this has happened in my attempts to enter his cinema. Maybe I'm just not watching the right Godard films? (I like Weekend...). I recall once writing Jonathan Rosenbaum a rather silly fan letter in which I asked him to help orient me... Of course, he never wrote back... 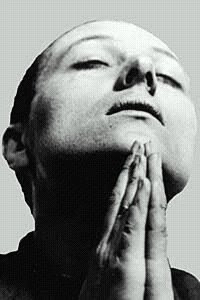 But there's more! More, I say! Carl Theodor Dryer's Passion of Joan of Arc, which "stars" the amazing, expressive face of Renée Falconetti, above, but also features a notable small performance by Antonin Artaud, will be running at the Cinematheque in mid-July; it's one of the most powerful movie martyrdoms I've seen, and since they're projecting the DVD version, I'm assuming you'll get to see it accompanied by Richard Einhorn’s Voices of Light, a striking opera/oratorio (or so I'm told on the Criterion site - I wouldn't know an oratorio from an oreo) that was inspired by the film. It's beautiful, indeed transcendent piece of music (whatever the hell you call it). I keep thinking that a "movie martyrs" series would be fun: I propose a double bill of The Passion of Joan of Arc with Abel Ferrara's Bad Lieutenant, say. (Did you know Werner Herzog is making a what he insists isn't a remake of that, with the same title and Nicolas Cage in the lead role? WTF?).


We then get into the realm of weird, noisy music, and Vancouver's legendary and dangerous Tunnel Canary. There will apparently be two screenings of Eric Lupe's documentary on Tunnel Canary, which includes a survey of the Vancouver noise scene past and present, tons of amazing footage and engaging interviews. The first, I'm told, but cannot easily confirm, is on July 19th, at the Sweatshop; the second will be at Blim, and will feature a performance by Nathan Holiday. BRING HEARING PROTECTION! (Oh - Josh at Zulu was apparently putting out a limited edition 2XLP compilation of rare Tunnel Canary stuff. I wonder if that's happened yet?).

Also weird, but not necessarily that noisy: Crispin Hellion Glover, whom I do not profess to understand at all, will be making an in-person visit to the Cinematheque, bringing his film What Is It? for several screenings, beginning July 18th. I have not seen this film. I once owned a signed, limited edition artefact by Glover - a bizarre little book on rat catching, which appeared to be some 19th century text that Glover had gone through with a felt pen, modifying it, crossing out words, blackening things. I have no idea what happened to this creepy little art object, but I do know that I no longer possess it, which is a bit of a relief. I am not, you understand, recommending that anyone go to the Glover event, but if you're like me, you will be compelled to be there. I accept no responsibility for anything that transpires, just because you read about it here.

There's lots more, of course, at the Cinematheque and the Vancity Theatre - click and explore. I'm not really a Jacques Tati fan, but I'm very excited about the return of the Cinematheque's film noir series, later in the summer (but which doesn't have its own link yet, but if you haven't seen it, don't miss Billy Wilder's Double Indemnity, in particular!). I'll probably check out the Guy Maddin film and the documentary on Harlan Ellison (whose writing I dearly loved as a teenager). Vancity-wise, the docs on Marcuse and McLuhan may get me out of the house, and as someone terrified by GMO's, I'll be sure to check in with The World According to Monsanto.

So much cinema, so little time! Thanks to the Gods of cinema for whispering in folks' ears for me... 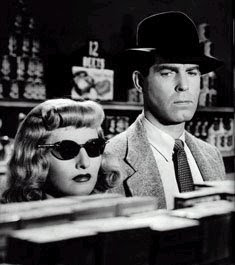 Posted by Allan MacInnis at 7:01 AM

where can I see some undergorund/alternaitve/short films in Vancouver?
I will be there for 4 weeks this sumemr and would like to see something a bit local, artistic,

where can I see some undergorund/alternaitve/short films in Vancouver?
I will be there for 4 weeks this sumemr and would like to see something a bit local, artistic,

I actually don't get out to underground/short films that much - mostly I just go see arthouse features at the Cinematheque and the VIFC. If I were you, I'd start by asking questions of the good people of VIVO (Video In/ Video Out), who hold film events sometimes; there's a Super 8 club that's affiliated with them. There are also lots of little performance venues like Blim, the Sweatshop, the Emergency Room, the Secret Location, and so forth, scattered through East Vancouver; mostly such spaces host concerts or serve as gallery/studio space, but film screenings do occur (as in the case of the Tunnel Canary doc at the Sweatshop). There's a catch: since some of these venues are only quasi-official or underground, it is not always that easy to know, if you're out of the loop, what is going on at them at any given time. I will try to see if a friend can give you a better answer, by posting his own comment... but I would start with VIVO and Blim, which are the most above-ground spaces, and follow the thread from there...