The Wicker Tree: new on DVD and Blu-Ray 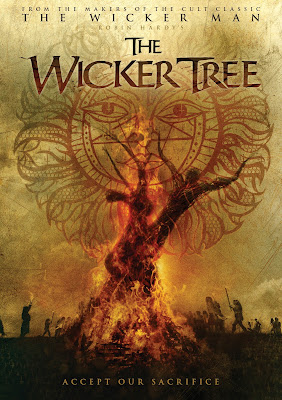 EDITED to include mini-review, now that I've seen the film:

Jeez... I may complain about the selection of DVDs at the Zellers in Maple Ridge, but they taught me something today: they had in stock The Wicker Tree, a follow up to the cult classic The Wicker Man written and directed by the same soul as made the original, Robin Hardy. Even Christopher Lee has a bit part! Before today, I was completely unaware that this film existed. Since I wasn't prepared to invest $19.99 in it, sight unseen, I found another means of viewing it, with the understanding (between myself and the universe, but I generally keep such promises) that if it proved to be a film I'd be glad to own, I would do the right thing and buy it.

There are, indeed, very interesting things about The Wicker Tree. It at first comes across as being about the sexual contradictions that proliferate in America - which, depending on your angle, can be seen as a chastity-obsessed, purity-ring-wearing conservative backwater, or a den of sin and overt sensuality; the film makes the inspired choice of embodying both sides of the contradiction in one character, Beth Boothby (Brittania Nicol), a former pop starlet - best known for her hit "Trailer Trash Love"  - turned Born Again evangelical Christian. Beth and her fiance (a "Cowboy for Christ") travel to Scotland for missionary work, where they encounter, of course, randy Pagans with beliefs of their own, who put them to the test. Its a very interesting theme to table - "sex in Christian America" versus "sex in neoPagan Europe," say - and got me excited to see how the film would proceed with its explorations, and where it might arrive. The second most inspired aspect of the film lies in the use of song - particularly a hymn about how there is "wonder-working power in the precious blood of the lamb," which is very interesting to hear through Pagan ears. One very memorable scene (mild spoiler follows) involves the villagers' reworking of this song, for their May Day festival, as a prelude to a rather bloodthirsty (but too briefly glimpsed) revel; its a minute that more than justifies the time the movie asks you to invest to get there. Finally, on the plus side, The Wicker Tree  has some lovely landscapes and sets, and is photographed with an aesthetic that, while contemporary and fresh-feeling, does bring to mind the original, pleasantly enough; given the time between the films, the differences in contexts of reception, and so forth, Hardy should be applauded for this achievement and encouraged to continue. Fans of The Wicker Man will find this follow-up well worth watching, whatever its flaws.

It does, however, HAVE flaws, and those not concerned with spoilers may wish to read further on them. I'm not sure, for one, that The Wicker Tree needed a backstory involving a nuclear accident and infertility: where such, er, elaborate elaborations are not needed to tell a story effectively, they should best be left out, that they not distract from the main point. There also comes a time in the film where it seems to drop altogether its interest in American sexual contradiction as viewed through the eyes of European Pagans; the tabled theme vanishes into thin air as the May Day celebrations get underway and our young Americans find themselves in jeopardy, which alas does kick in with a bit of a feeling of formula. In fact, I'm unclear whether the film ultimately makes any statement at all about America, beyond the odd passing jab... or if indeed it makes any statement about anything at all, since, unlike the original, it doesn't tell a particularly elegant story, and there are bits in it that seem to clutter up the landscape unnecessarily, contributing in no way to the main thrust of the film and confusing attempts to read it. A case in point would be a  moment that seems deliberately designed to evoke the Hostel franchise, which I was not at all expecting and did not really need (since I don't think the parallels between the films - both involve Americans running into trouble in Europe - cast any very interesting light on the film). Last and least, I found myself thinking at times that, as much as it was true to the spirit of the original, The Wicker Tree was a little too "soft" for the contemporary cinematic landscape; showing a male character undressing, for instance, Hardy retreats to a rear view, and is consistently tasteful and inoffensive in places where he probably could have gone much further. The original film pushed some boundaries as to what could be done onscreen - this film should have done the same, which probably would have meant going briefly hardcore now and then. It would have been much more satisfying and disturbing, as would keeping more closely to the theme of sex. The ending of the film is simply not orgiastic enough. This applies to the film's violence, too: I mean, if you're going to (spoiler!) flay someone, these days it pretty much has to be done onscreen if you want to make an impact in the world of horror (cf. the French film Martyrs).

Final verdict: though I am glad to have seen the film, I must make my apologies to Zellers, to Robin Hardy, and so forth: no way will I be shelling out $20 for The Wicker Tree. If I find it used for $3 someday, MAYBE I'll buy it. Still, readers are advised to cautiously check this film out, by whatever means are available these days that suit your conscience (I would recommending renting the DVD, but that's gotten very hard to do). It IS worth a watch. It is NOT essential viewing, but definitely - as others have said - it's better than that ridiculous remake...
Posted by Allan MacInnis at 6:59 PM