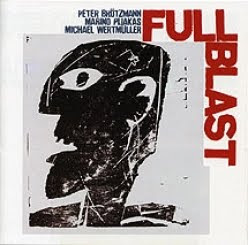 The jazzfest is underway, and I've missed most of what has happened thus far - I've only gotten to see Peter Brotzmann, kicking things off with his unit, Full Blast. That much-anticipated experience was somewhat disappointing, at least compared to the "Brotzmann of the mind" that is invoked when I listen to his music on my headphones. I can't say what his natural environment really is, but the "Brotzmann of the mind" is playing dirty underground clubs and squats - or at least far seedier places than the very clean, very orderly Roundhouse Performance Centre; has a far less-affluent-looking audience in front of him; has one or two other horn players (or a Haino Keiji) to interact with; and overblows like he's channeling some private inner demons through his saxophone, playing like a one-man Borbetomagus, invoking revolutionary, transformational energies - some sort of primal chaos. The Brotzmann of the jazzfest, by contrast, was playing in a polite middleclass context, was alone with his rhythm section (tho' they were an avalanche indeed), and spent a surprising amount of time referencing the blues - rather mournfully, but with much more sentiment and tenderness than I've come to expect of the man's music. That was interesting, actually, and there was still some very exciting and subtle interaction between band members; and in fact, the more tuneful passages - including at least one explicit reference to Albert Ayler - were often in fact more engaging for me than the "full blast" moments, which is a reaction I don't entirely understand... but the performance as a whole simply could not do what the experience of listening to Brotzmann devoid of context does. Maybe I'm learning something about myself: that I like jazz - but I don't always feel comfortable with the context it occurs in...

It will be even stranger seeing Group Doueh in the context of the jazzfest tonight, mind you - because there's some radical recontextualization going on there! We'll be seeing a band that normally performs all night at weddings in the Western Sahara, playing a music that has evolved with very, very little western influence - because contra the impression that you might get reading the Straight article I wrote, there is actually very, very, very little reference to western music going on. Guitarist/bandleader Doueh might tip his hat to James Brown and Jimi Hendrix, or find a kindred spirit in the blues - but you have to listen pretty creatively to actually hear any of that. It's kind of like eating a really rich, really tasty curry and trying to pin down an individual spice - James Brown is the fennel, Jimi is the cardamon, and the blues are, maybe, the turmeric, but mostly what you're getting, listening to a Group Doueh album, is a garam masala unlike anything you've encountered before - something really quite foreign to a western palate, something that you need to have pretty special ears (or a bit of practice) to hook onto. I mean, what about this album cover suggests Vancouver, or jazz festivals, or any western musical styles?: 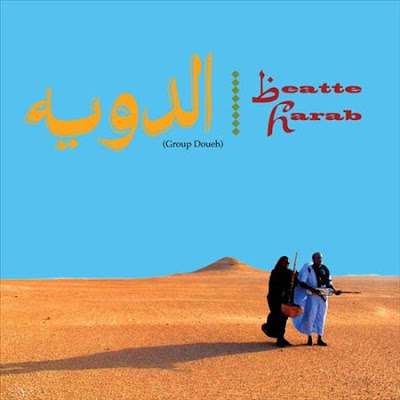 I will put a larger piece of writing online about Doueh, with more from both Doueh and Hisham Mayet, after the festival, but I had two questions for Mayet that might be of interest to those attending. The first was to ask about how Doueh's western influences might be perceived in the context of Western Saharan culture. "The fact that Doueh is influenced by James Brown and Jimi Hendrix, probably to a western listener, makes his music easier to access," I observed, "but in his cultural context, is there anyone who would disapprove of that sort of thing – the fact that he’s playing traditional music with a kind of western bent? Does anyone care?"

Hisham Mayet answered: "No, no. I don’t think it presents a problem for him. 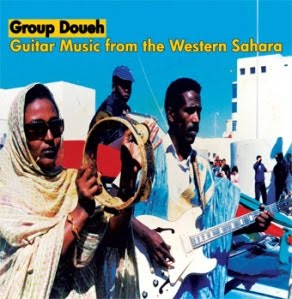 His wedding repertoire is still traditional – the traditional canon that is his foundation, which is most of what Sahrawi music/ Mauritanian music is. All of it comes from a pretty limited canon. If you’ve heard enough of this music, you realize it’s all coming from the same stock of songs and poetry that are done ad infinitum. One of the best things about Doueh is that he was able, even early on, to branch out beyond that structured canon and incorporate all these sounds, western or otherwise. But I’ve never known an example of other musicians or anyone frowning upon the fact that he’s fusing the two. I mean, it’s music – they’re just going to roll with it. I mean, I don’t think he’d play any of the poppier songs at a wedding, because it’s just not ever requested; they usually tend to go for the formula of the modal system - the modes, the poetry that’s sung at weddings. Because it’s all pretty traditional. But they’re open to whatever. He can incorporate as much as he wants, and nobody’s going to give him any flak for it. It just kind of is what it is."

The next question was whether, playing to western audiences, he ever tries to change his presentation?

"I think so," Mayet responded. "Sometimes. That’s a battle I have to fight with him all the time. I think he tries to acquiesce to what he thinks western audiences will like, and he tends to get away from the foundation of what I know he’s capable of doing, when western eyes aren’t upon him. I think that’s had a lot of impact on him, too – positively and negatively, in a weird kinda way. Y’know, doing these tours, and realizing that he’s released these records, and reading some of the good reviews that he reads, that I send him or translate for him – I think sometimes he tries to craft songs based on what he feels [people are responding to]. All of a sudden it’s like this thing where he’ll play a few live shows and he’ll play a few numbers that I can’t quite negotiate in my head as something that is his true essence. And I know he’s just doing it to maybe please the crowd, and I’m like, 'you know, this can’t be, you’ve kinda gotta stick to your guns and do what you know how to do and don’t feel like you’re trying to please the crowd! The crowd is here to hear what you’re essentially about, not what you think they need to hear because they like you or don’t like you.' I mean, it’s a rare thing, but it’s happened – it’s happened enough that I’m talking about it!"

Bear in mind that this is Group Doueh's first North American tour, as well! The band has just released its third and fourth albums, Beate Harab and Zayna Jumma, on the label Mayet co-owns, Sublime Frequencies; both were recorded in 2010 by Mayet. Pretty damn exciting that we're going to get to see music like this in North America; this is a rare experience indeed. 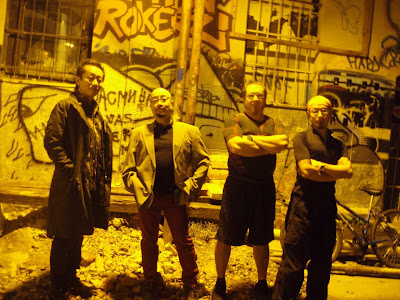 The guy who is best poised this fest for easy, discord-free recontextualization, tho', is perhaps Kazutoki Umezu (that's a link to the Coastal Jazz page; my Straight article is here. Umezu is second from left in the photo above). Since he's somewhat of a postmodernist, it's hard to assign him any one natural context to begin with - he's used to slipping around between them, anyhow. I have actually seen, and even chatted with, Umezu in what could be called his "natural environment," the Shinjuku Pit Inn in Tokyo, but his music is very much an international one, even played there (especially since only one of the musical influences mentioned in the Straight piece is even native to Japan). The story of the name of his unit, KIKI Band, had to be shortened a bit to fit into the Straight piece, but it's quite revealing. It began - go read the Straight article - when KIKI were going to do their first North American tour, and Umezu asked an African familiar with his music to name them; the fellow came up with KIKIKI, in fact. The first two KI's were based on Swahili words for "bald" and "chameleon" (since Umezu changes colour all the time). But there was actually one more KI referenced, Umezu explained, the word kigeugeu. I couldn't actually track that down in the Swahili-to-English search engines I found, but Umezu's interpretation was that it was "kind of like Ninja – every time they can appear, everywhere, like, sometime in Japan, sometime in America, sometime in Europe, sometime in some Asian country, sometime in Africa. So he says KIKIKI Band, but it’s too long for us – so we make KIKI Band. And KIKI has also double meaning, by Japanese. One is danger" - actually, “crisis,” according to my Japanese-English dictionary - "and one meaning – kikini kiite kudasai - is like, please listen! So many meanings, it has." 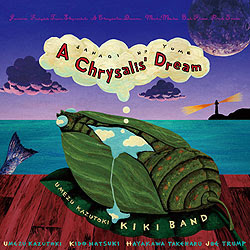 Umezu is touring a new KIKI Band CD, A Chrysalis' Dream. Retaining his somewhat Japanized English, what Umezu said, in explaining the title, was, "I’m interesting about chrysalis – also changing from something to something. I don’t what I want to be next. I eat jazz, I eat blues, I eat Japanese enka, I eat klezmer – I eat many kind of music, that is in my body, every material is in my body. But I’m not sure what I want to be yet, so I’m dreaming, like a chrysalis. I don’t know if they have dream or not, but... I’m not worm, but I’m not a butterfly yet."

I'm especially looking forward to hearing Umezu's guitarist, Natsuki Kido, again; he's one hell of a player. Fans of adventurous music from diverse influences are urged to check out Bondage Fruit, online, in addition to KIKI Band. There's lots to be heard!

Unquestionably, however, the most exciting thing for most folks about Dr. Umezu's show in Vancouver is that it's ENTIRELY FREE - he plays Sunday at 5:15 at David Lam Park. The irony of that is, that very Sunday, DOA will be giving a free concert at Adstock in Maple Ridge. With much respect going to Joe, I'm not going to be there for that. It's a bit easier to see DOA in Vancouver than it is KIKI Band!

This is all overlooking that Mats Gustafsson's The Thing plays Saturday, but I've written enough, for now. Whatta cool jazzfest this is this year...! Good work, people!
Posted by Allan MacInnis at 5:09 AM