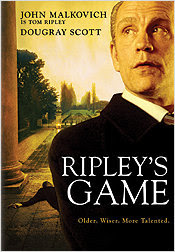 Finally caught up with Ripley's Game the other day, based on a Patricia Highsmith novel (previously adapted as The American Friend, by Wim Wenders); it was made in 2002 by Lilana Cavani, who directed the highly memorable film The Night Porter back in the 1970's. It's a solid, engaging adaptation, more faithful to the book than Wenders'; and I quite liked John Malkovich as Tom Ripley - he is quite convincingly amoral, while still being appealing (as opposed to the tortured interpretation given by Matt Damon in that other Ripley film). Was kind of amused at how much my (80 year old) Mom disliked it - turning to me with a critical sneer and saying things like, "This is sick!" (I did offer several times to turn it off). I guess getting away with murder isn't my Mom's cup of tea...

Anyhow, that, plus a comment on my Cry of the Owl review, about a fine, under-appreciated film adaptation of a Highsmith book, got me poking about online, to see what's new since the last time I trolled about for Highsmith stuff. There's an interesting bit of writing on what I assume is a lesbian blog, AfterEllen, about Highsmith and her little-known comics work, which I've also long been curious about. Also an enjoyable short film on Youtube about Highsmith. 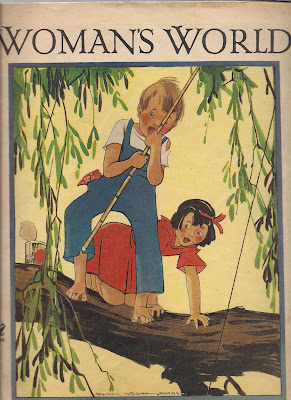 Guess I should put something in the pot myself, then, that has not been so widely remarked upon: fans of hers should be aware that a very early publication of her writing, in a Woman's World from July 1935 (pictured above), can be found on the cheap if one looks about carefully enough (there's a copy on Amazon for $12 at the moment); it hasn't widely been seized upon as a Highsmith collectible, yet, and there's not much information about it online at present, but a chronology of her publications does confirm that the piece, "Girl Campers," on page 25, was definitely by her. I have the magazine here; the piece is described in the margin as "a series of letters written by 12 year old Patricia Highsmith during her stay at a girl's camp, and on the occasion of her first absence from home." It's clearly a young girl's writing, but there are observations in it that have a bearing on her later life, prefiguring her misanthropy and her keen observational powers ("there is a girl named Marie Stanter that easts like a pig at the table. She has thirds at every meal, and takes the biggest bites"), maybe even traces of her nascent sexuality (as can be inferred, perhaps, by her concern about swimming nude with other girls: "We are going in swimming 'Diana' tonight... Diana means without any clothes on at all. Do you think it's all right to go in Diana? It's very dark.") The piece is illustrated, too, perhaps by the young Highsmith herself (it is not impossible, but, not being an expert in recognizing her drawings - particularly her childhood drawings! - I cannot say with certainty; no credits are provided that I can spot). An illustration in a subsequent edition (January 1940) of Woman's World, credited to the name Mary Highsmith, may well have been Pat's work as well, but I haven't tracked it down. Her comic book contributions are hard to pin down, but her Woman's World stuff is findable... at least until more people become aware of it...!
Posted by Allan MacInnis at 10:57 AM

I commented on your Cry of the Owl review awhile back, and didn't even see that you also covered Ripley's Game here. I need to pay more attention.

Malkovich's Ripley is faithful on the surface: he's rich and upper class, wears nice clothes, and appreciates fine food, music, and culture. But the similarities with Highsmith's Ripley end there: her Tom is a polite and likable man who detests violence and considers it a last resort, while Malkovich is a smug and insulting prick, and a total psychopath who commits unnecessary murders every chance he gets. At one point he threatens to kill everyone on a passenger train if his wristwatch breaks; this is Hannibal Lecter, not Tom Ripley.

Dennis Hopper's Ripley in The American Friend is the exact opposite. The surface details are different: he wears a denim jacket and cowboy hat, only appreciates art as a financial investment, eats Cork Flakes, and lives in dilapidated old mansion with a pool table and jukebox. But he gets the character right: he's polite and courteous, quietly and subtly menacing instead of overtly psychopathic, distant and sociopathic but occasionally feeling the slightest pull of guilt and longing for companionship. He nails it.

I don't want to sound too harsh toward Ripley's Game, since I find it to be an enjoyable movie. But like the Matt Damon film, I can only enjoy it after completely removing the book from my mind, or else I'll spend the entire running time shaking my head in wonder at how the screenwriters could have so badly misunderstood the character. And regardless of the portrayal of Ripley, The American Friend is just a better film, from the acting to the writing, directing, and music. It's great where Ripley's Game is merely good.

I see the truth in what you say! The recent version of Cry of the Owl is still by far my favourite Highsmith. After seeing that, I was quite delighted to watch Julia Stiles as Lumen in Dexter, Season 5...

I still haven't seen Dexter, although several people have brought him up in conversations when I mention the Ripley books. TV shows are daunting for me, because there's just so much material. I have a hard enough time sitting through two hours of a film, let alone half a dozen seasons of a show. Still, I should at least watch the pilot or something. It sounds interesting.

The thing with any of these new series is that they work best if watched in giant compulsive chunks - get the DVDs of a whole season and plunge; they're practically designed to be watched thus (one hour per week makes no real sense). I hadn't known this phenomenon with any form of cinema or TV before, but with these Showtime/AMC series - Dexter, Deadwood, and Breaking Bad are the three I've consumed this way - there's this strong compulsion to watch one more, then one more, then one more... I've found myself still awake at 7am having watched 8 Dexters in a row. If you are at ALL addictive by nature, you may surprise yourself by doing the same...

Also re: Dexter, they're actually kind of uneven. Season one is relatively tame, but probably essential to establish the characters, season two is the strongest of them, season three (with Jimmy Smits as the guest star) the weakest; then season four (with John Lithgow) and five (with Stiles) are about equally good, almost on par with season two... If at all possible see the whole thing in sequence...

I don't mind waiting a week for the next episode, but yeah, it's nice to have a bunch of them on DVD and just binge.

You've pointed out another problem I have with TV shows: the uneven quality. The first season is usually not nearly as good as what comes later, since they're still feeling their way and trying to find their stride, but you can't just start with Season 2 because you'll be completely lost.

Yet another problem is the episodic quality. It's like comic books: there are rules you have to follow. You know that certain characters aren't going to die, nothing really big is going to happen, because they must return to the status quo by the end of the episode.

Still, I'll give Dexter a try at some point. It'll probably just take me forever to get around to it, like most things. I have books and DVDs on my shelf that have been there for years without being opened once.