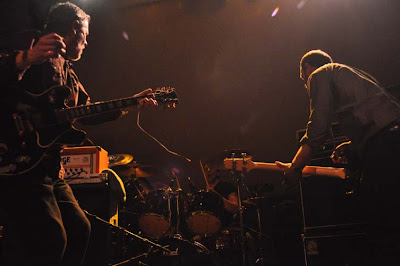 Swans by Femke van Delft, not to be reused without permission

Issue #68 of Big Takeover, out now, is probably the single coolest issue of a magazine that I've appeared in - at least in terms of MY articles: major interviews on Motorhead and Swans, a small piece on the Residents, and a wee review on Vancouver's China Syndrome. The thing about the Swans piece is that only half of it appears in print - the other half is online now at Big Takeover, with some amazingly dramatic photos by Femke van Delft. This is a very, very illuminating Swans piece, I think, getting into Gira's formative experiences and describing in part, at least, what the experience of seeing Swans live was like. I do recommend checking out the print issue, as well, though - I saved some essential stuff, like Gira on Jarboe, for that.
Posted by Allan MacInnis at 11:33 AM