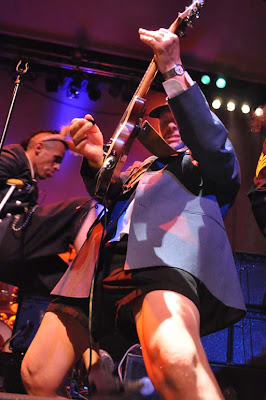 The Little Guitar Army at the Ron Reyes birthday bash, by Femke van Delft, not to be reused without permission

My review of the Little Guitar Army's new CD is in the Straight today. Hope I wasn't too hard on the packaging! Lots of other great local CDs - including, interestingly enough, CDs by bands that contained members of the LGA (like the Muscle Bitches or Betty Kracker) had kinda cheapie-lookin' CD covers, an' I mean, it ain't THAT bad. But, hell - if anyone's pissed off, they should bear in mind that they can always quote me out of context, for instance, when I say, ""Little Guitar Army is the best fucking rock band anywhere at the moment, period." (In fact, I don't actually SAY that - I just say that I'd kinda hoped the CD would convince the world of that - but, I mean, LGA shows ARE pretty goddamned awesome, you know?).

Speaking of which - June 9th at the Biltmore, folks, is the CD/ video release party. If you haven't seen this band and enjoy rock music of any sort, you should go. Seriously.