Little Guitar Army in the Straight, and tonight at the Biltmore 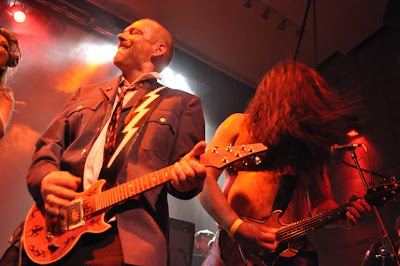 Little Guitar Army at the Rickshaw by Femke van Delft, not to be reused without permission


Hey, the Little Guitar Army apparently got the cover on the Straight today! (Haven't seen it but it's the top article online, written by Mike Usinger). Excellent! And just in time for the Biltmore record release tonight! (I have my own interview in the works - meaning I have a bunch of stuff on tape that I haven't transcribed yet - but it's slated for publication a bit later...). Again, this is an amazing band to see live... most fun you'll have at a rock concert in Vancouver!
Posted by Allan MacInnis at 10:43 AM

It is nice The Straight, which I am old enough to recall from its Fabulous Furry Freak Brothers glory days, is still cool enough to throw the incomparable LGA on the cover. I have to get their record. Do you know if they have printed up any vinyl?

Yeah, a friend of mine looked at this issue's cover and said something like, "Finally, a cool cover on the Straight, it's usually fashion shit...!" It's an awesome photo, and three cheers to Mike for giving them such generous coverage.

Re: LP's, not as I've seen so far, but I gather that there's going to be a second pressing of the CD with an expanded booklet (& supposed lyric sheet!), and maybe there'll be some vinyl, too; it would certainly be a good move. They have their own website - www.littleguitararmy.com - which might have news. I'll announce it here if it happens, I have my own sprawling interview with them to transcribe at some future date (TBA).

You noted the Squamish Five movie tomorrow at the Waldorf, right?