Susanne Tabata, Kibatsu cinema, and a side-note on Jafar Panahi! 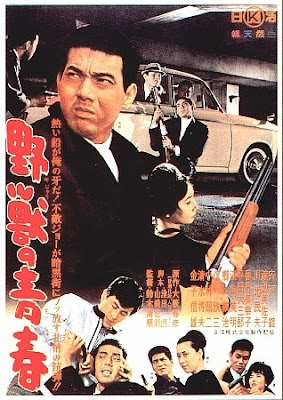 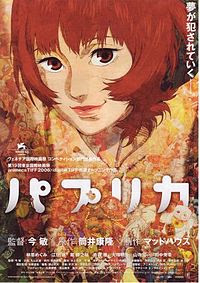 Susanne Tabata, the maker of Vancouver punk rock documentary extrordinaire Bloodied But Unbowed, will be curating this year's Kibatsu cinema series at the Pacific Cinematheque (1131 Howe St) this weekend, both because she was invited to, and, she explains, in memory of her father; she's programmed everything from Yakuza films (Seijun Suzuki's 1963 Youth of the Beast, poster above) to anime (like Paprika, poster to the left) - including a film that I believe is having its Vancouver theatrical premiere. "A group of DTES kids - the anime selection team - picked The Disappearance of Haruhi Suzumiya", Tabata tells me by email. "It's a blockbuster in Japan. The distributor let the film come here because they were so captivated by the story. Here's a photo of them:" 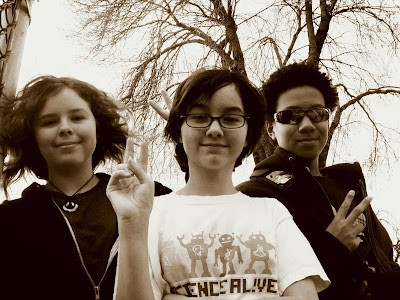 "The kids are on our heels...: ( l to r ) UNA, AVY and ZUKI. Power to the DTES" - Susanne Tabata, photo, not to be reused without permission

There's also a documentary on the independent Tokyo music scene that I sadly will miss, Live from Tokyo. I went to a few shows in my days in Tokyo - often in the western reaches of Shinjuku (or was it Shibuya?), in the tiny Penguin House, say (where I caught Haino Keiji, playing to a packed house of 40 people) to Star Pines Cafe (where I saw Ruins-Hatoba, featuring Yamamotor - Seiichi Yamamoto - of the Boredoms and Omoide Hatoba) to... hell, I'm not sure of the names of some of them were. (I mostly went to western rock concerts when I was in Japan, like Joe Strummer, GY!BE, and Lou Reed, in part because it was a damn sight easier for a solo-travellin', non-kanji-readin' gaijin like me to find venues like the Akasaka Blitz or the Liquid Room than it was to find some little live house in Koenji; fewer questions to be asked of strangers in broken Japanese, eh?). I wish I could be there for this film, actually, but I have other plans. By the way, Tabata informs me that "There is a music tour called NextMusicFromTokyo which does three Canadian stops - Vancouver, Toronto and Montreal. They will be at the Biltmore in October." 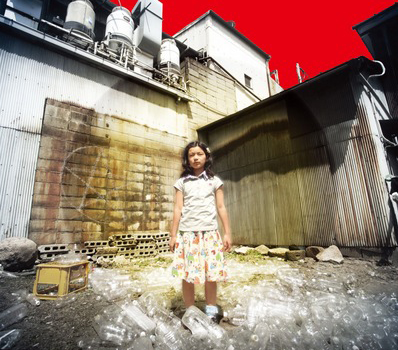 Lastly, there's also a screening of the giddily deranged 1977 recent western cult hit "discovery," House, and the Vancouver premiere of Go Shibata's Doman Seman, which Susanne describes as "the biggest kibatsu or off-the-wall flick" in the series. "It's a nihilist tour de force attacking the conventions of 20th century greed and human chaos," she writes. "Go Shibata is an indie cult hero. Having paved the way with Late Bloomer - the film about the handicapped serial killer who seeks revenge after his heart is broken by going on a killing spree. Doman Seman pushes the boundaries further with a mash up of music (ska/thrashmetal) and riveting rage against society." 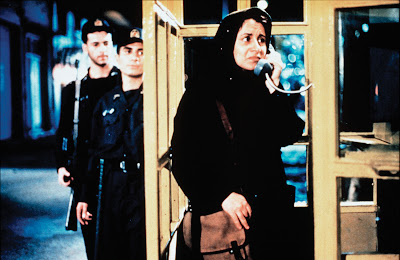 Also of note: there's an upcoming series of films in support of Iranian filmmaker Jafar Panahi, who has managed to be persecuted both by the Americans and the Iranians, while making compelling, provocative films (I've only seen The Circle, pictured above, which is a structurally inventive feminist film, but it was very moving and educational). He's currently serving a six year sentence for "sedition-like charges," having pissed off the current regime, and has, apparently, been barred from making films for 20 years. Looks like he may be a "future filmmaker in exile." Abbas Kiarostami fans may want to note that one of Panahi's films to screen, The White Balloon, was scripted by Kiarostami - Panahi's mentor.

See also my piece on Machete Maidens Unleashed!, below, and note the really interesting-sounding film its paired with: Orgasm, Inc.
Posted by Allan MacInnis at 2:53 PM