random notes from a net cafe, covered in sweat from the moshpit, most of it mine 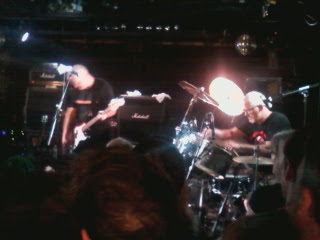 Bruce Greenwood was seen riding a bus earlier in Vancouver today. Or at least a bunch of us thought it was him. I opted to leave him alone, rather than tell him I admire his work. Hope, if he was heading to a screening of Meek's Cutoff, the theatre had gotten the lens issue sorted out. Welcome to Vancouver, Mr. Greenwood.

Loved the use of lighting and music to suggest orgasm in the Gregg Araki film. Loved the rich colours. Too bad I had a 20-minute time limit to talk to him - so much more I could have asked. I like that during his film, as in the run up to the Pixies show, when the eye-slitting from "Un Chien Andalou" was shown, some people in the theatre gasped.

Wonderful, warm pit at the Nomeansno show. Encore of "Two Lips, Two Lungs, and One Tongue" contained a delightful digression into "I Don't Wanna Go Down to the Basement" (or whatever, exactly, the title is). Last night's first encore of "The River" was replaced tonight by "Victory," dedicated to the Canucks. Followed by "Rags and Bones." "No Sex" was still in the set. Strongest of the new songs performed - a toss up between "Jubilation" and "Slave," that wonderful, industrialized, overt blues. "All the Little Bourgeois Dreams" didn't make the set list.

Funniest moment: sweaty mosher beside me bends to the floor to retrieve a wallet, shows it to me, and, thinkin' he's looking out for a brother, says, "Is this yours?" I shake my head. He examines it, recognizes it, and his face changes. "Holy shit, it's mine!" As you give, so shall you receive. He was real happy about that.

Lots of other emotions in a pit, tho'. During the wind-up of "I Need You," another mosher turned and confided in me that the song made him sad. "Reminds me of a girlfriend." He'd been mouthing the lyrics throughout, though. Both nights, there were a fair number of girls in the pit, and I think one of the frequent female crowd-surfers was there both nights.

The Biltmore has a really low ceiling for crowd-surfing. Someone surely has bumped their head wickedly at some point.

Finally, it looks like those vinyl Live & Cuddlys the band has been toting around for the last couple of years have finally sold out. There were some at the merch table last night - but none today. There is a new pressing w. a new cover for Tour EP 1, tho'. And the 2LP version of Wrong.

Wonder what the next Nomeansno vinyl reissue will be? I'm voting for a 2LP set of Worldhood - it only ever came out on vinyl in a very abbreviated form.

Wonder what the next box of vintage NMN vinyl to be discovered in a Wright's garage will be.

It was a great night.
Posted by Allan MacInnis at 1:12 AM