Pat Garrett and Billy the Kid to screen at Dylan fest

Some great films playing at the upcoming festival of Bob Dylan-related movies, Dilineating Dylan, at the Vancity Theatre: Don't Look Back, I'm Not There, and Martin Scorsese's No Direction Home, an unusually revealing documentary, are all well worth your time, if you haven't seen them. The one that needs to be seen by anyone passionate about American cinema, however - regardless of their enthusiasm for Dylan - is Sam Peckinpah's Pat Garrett and Billy the Kid, playing this Saturday, May 21st. It's a striking fable of the co-optation of America by capitalism and land barons - or maybe it's about getting old? It's a film with more relevance to the American counterculture than people might expect from Peckinpah... but the history of the film is almost as sad as the story it tells, and the cut they're playing is compromised, as are all versions of the film available.

A could-have-been classic of '70's cinema, arguably the most profound and ambitious film Peckinpah ever attempted, with a Dylan soundtrack and memorable performances by James Coburn, Kris Kristofferson, and Dylan himself, Pat Garrett and Billy the Kid was taken from Peckinpah's hands by the studio back in the 1970's and cut against his wishes. Peckinpah kept his own rough cut to screen for friends - not, it has been argued, a final cut, since it meanders and bloats and has several scenes that clearly would not have been retained in a 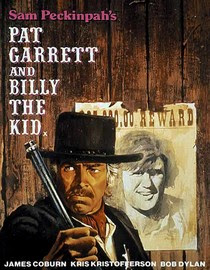 finished, polished product; it looks, for good reason, like the work of a drunken genius, with moments of brilliance competing with moments of obvious self-indulgence and alcohol-soaked poor judgment, never given a final edit because it had at that point been taken from him anyhow; there was no reason to complete it. However, this very rough rough cut was clearly, in many regards, truer to Peckinpah's intentions than the studio version, and has moments of great power that were lost or damaged otherwise, if you can sit through the rest. Among the parts that work, for me is a climactic line, uttered by Coburn, after Billy the Kid (I'm assuming this isn't a spoiler) has been shot; a bounty hunter riding with Coburn goes to cut off Billy's trigger finger as a souvenir, and Coburn, indignant - even though he has played a major role in hunting down his former friend - hits him and chastises him, saying "What you want and what you get are two different things." These words ring like an epitaph for a free America, as romanticized and eulogized by the director; it's a chilling, memorable moment - as is, whichever cut you watch ("with or without lyrics"), Slim Pickens' death scene, to the strains of "Knockin' on Heaven's Door," which a certain cinephile friend of mine has described in private correspondence as "the single greatest moment in cinema ever."

Neither of those versions - the chopped up studio version or the indulgent and uneven rough cut - are screening at the Vancity, however; instead, we get the "Peckinpets" cut, prepared by Peckinpah scholars for DVD release a few years ago. This attempt to produce a final cut from what Peckinpah left behind cuts some of the flab off the rough cut, while improving on the original studio version considerably, and, if I recall, adding material found in neither previous version! (There's also been considerable restoration and digital remastering - it looks and sounds great, compared to the rough cut, which was also released on the DVD). Alas, Peckinpets are a group of critics who, as a whole, seem singularly willing to impose their own vision on Peckinpah's work, sometimes clearly deviating from anything Peckinpah would credit: Stephen Prince has tried to argue that Straw Dogs is somehow an anti-violence film without a trace of misogyny (pshaw!), and Nick Redman, the key figure behind this restoration, has inexcusably (by me) chosen to eliminate the "two different things" line, thus doing more to repeat the violence done to Peckinpah's vision than provide a decisive, uncontroversial final version. What's to be done, then? Three versions of the film, none wholly satisfying. Those who have seen the rough cut and grown attached to it will doubtlessly have their own moments of frustration with this revision of the film; perhaps if you've seen no version of it previously, you might actually be in a better position to appreciate what's being offered.

Just remember, when Coburn slaps the bounty hunter down, he's supposed to stand over him and say, in a most emotionally-charged way, gruff, full of power, weariness, grief, and rage - "what you want and what you get are two different things." Sam would doubtlessly appreciate your imagining that line. I'd like the Peckinpets cut so much better were it there.